Bliss Rodriguez was born in NYC on April 2, 1945 to Dominican immigrant parents. He grew up in Hamilton Heights, between Harlem and Washington Heights, on the west side. Bliss was born visually impaired, having no vision in his right eye and partial sight in his left. At the age of 17 he became completely blind.

He attended the only school in NY at the time for the visually impaired, a Catholic grammar school run by nuns. The sisters wanted their charges to be well rounded, so as a child Bliss received ballroom, tap dance, music and drama lessons in addition to a standard primary education.

His parents bought him a piano at age nine, and he began playing it by ear. By high school he met fellow musician José Feliciano, and together they formed an instrumental trio ( guitar, piano and drums.) They gravitated musically to whatever was popular on the radio at the time: jazz influenced pop tunes like Back Home in Indiana and Steppin’ Out With My Baby, as well as R&B and early rock and roll melodies championed by the likes of Chuck Berry and Jerry Lee Lewis. The trio got their fifteen minutes of fame when they appeared on television’s “The Amateur Hour” hosted by Ted Mack ( still viewable on You Tube!,) before Feliciano was “discovered” and went on to his own pop recording career. Bliss’ musical world was turned on it’s ear, literally, at the age of seventeen when he first heard John Coltrane’s My Favorite Things and Bill Evans’ classically informed jazz harmonies. He would never again hear or create music in the same way.

After high school he spent two years taking classes at Julliard and studying privately with John Mehegan, before entering the Mannes College of Music in 1964. There he studied music history, theory, and keyboard harmony with Jerome Bronstein, among others, before graduating in 1969 with a BS in Music.

Still hungry for more education, Bliss entered the Masters of Music program at SUNY’s Harpur College at Binghamton in 1970 ( now called University of Binghamton,) where he concentrated in Performance and Composition. Before he completed his degree two years later, he had played in their jazz laboratories with visiting artists such as Slam Stewart, Frank Wess, Manny Album, and Eddie Daniels.

Following his graduation and restless with his life in New York, Bliss set out with a college friend on a lark to what was then the “land of opportunity”, oil- rich Houston, Texas. It was there he met up and coming Texarkana-bred jazz vocalist Roseanna Vitro. Together they formed a working jazz quartet - which broadcast live for three years from a nightly gig at the Green Room - and a life long friendship.

As a musician, Bliss’ principal concern is with an aspect of creativity and improvisation: how to be continually creative within the context of any given moment and how to allow an unimpeded stream of musical ideas to flow forth. He considers among his major jazz influences, first and foremost, Keith Jarrett, as well as Fred Hersh, Kenny Wheeler, Charles Lloyd, Joe Chambers, Clare Fischer and arrangers Gil Evans, Nelson Riddle, Claus Ogerman and Gordon Jenkins.

In spite of, or perhaps because of, the immense and highly complex musical palette he draws from, Mr. Rodriguez has, over time, come to appreciate the art of “paring down” his pianistic instincts to their simpler core, in the service of accompanying first rate singers - those who perform the repertoire of his earliest aural memories: the American Songbook, Hollywood musicals and timeless jazz standards. Show less

”Rodriguez proves to be the most gracious and effective accompanist of recent memory.” - C. Michael Bailey, All About Jazz

”Rodriguez shows himself to be very much a two-handed pianist full of subtle creativity.” - Scott Yanow, L.A. Jazz Scene

“The under recorded pianist gets to display his deft lyricism in the solos he crafts throughout..

”Rodriguez proves to be the most gracious and effective accompanist of recent memory.” - C. Michael Bailey, All About Jazz

”Rodriguez shows himself to be very much a two-handed pianist full of subtle creativity.” - Scott Yanow, L.A. Jazz Scene

“The under recorded pianist gets to display his deft lyricism in the solos he crafts throughout... splendid...” - Ron Weinstock, In A Blue Mood Blogspot 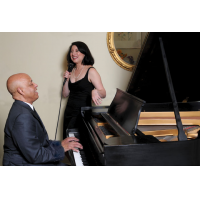 All About Jazz musician pages are maintained by musicians, publicists and trusted members like you. Interested? Tell us why you would like to improve the Bliss Rodriguez musician page.