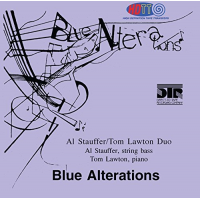 Al Stauffer was one of the Philadelphia area’s most esteemed jazz bassists. Largely self-taught on the instrument, at the time of this recording he had been a professional musician for more than three decades. Over the years he accompanied such prime jazzmen as Stan Getz, Zoot Sims, Al Cohn, Gerry Mulligan, Bill Evans, and Sam Most, and his association with Bernard Peiffer lasted a dozen years. He lived in Sewell, New Jersey and taught privately in Philadelphia and at Glassboro (New Jersey) State College, now renamed Rowan University. His duets with himself are a trademark of some singularity. Tom Lawton, a native of Collegeville, Pennsylvania, came to jazz endowed with twelve years of classical training, starting at the age of seven. He studied at the Bryn Mawr Conservatory with Horace Alwyne and Judith Willoughby and also attended the Philadelphia Musical Academy. He was inspired to study jazz upon hearing a performance by pianist Gerald Price. Not long thereafter, he began a concurrent study of piano (jazz and classical) with Peiffer and improvisational concepts with Stauffer. Each piece on this recording was recorded as a complete performance and contains no splices or editing. The recording was made using two Schoeps mics placed at a distance from the performing group to capture the sound of the group as you would hear it in a true acoustic performance with no amplification.

All About Jazz musician pages are maintained by musicians, publicists and trusted members like you. Interested? Tell us why you would like to improve the Blue Alterations musician page.