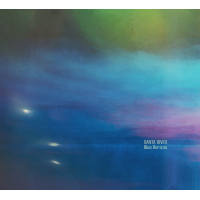 Blue Horizon is the 4th album of the band Santa Diver, formed in 2006 by Luca Kézdy on violin and David Szesztay on bass - the third member of the current formation is David Szegő on drums who has been with the band since 2015.  "The latest album of the trio is well structured and includes compositions with a great dynamic range as well as meditative pieces arranged side by side, altogether adding up to an extraordinarily rich musical material which features virtuoso playing and exceptional finesse of composition. Luca Kézdy is elemental while sensitive, her dynamic variations and mood registers dominate the album, with her worthy companion David Szesztay, whose effected bass music counterpointing the violin parts. The precise, playful and smart drum playing of David Szegő makes the whole picture even more exciting. This is real fusion music, where the individual compositions have been built on the ground of improvised jazz, several kinds of exotic styles and sometimes the good old trusted blues-based rock. (...) As we go on with the mostly big-picture-like songs filled with sounds, compositions (just to mention the tight and dramatic Wintersong and the almost epic-like ESD, which blend different styles in a very fluent way) it becomes all the more obvious that this well-respected concert band  recorded one of the most powerful Hungarian jazz albums of 2020.” (Barotányi Zoltán, Magyar Narancs 2020. march 12.) Most of the tunes were written by Luca Kézdy who, unlike the previous albums, wrote them on the piano. (Blue Horizon, Wintersong, E.S.D., Seed and Stone), Izland is by David Szesztay, while 68 is a co- written composition by Kézdy and Szesztay. The last, bonus tune of the album is like an epilogue played just on the piano. It lets the listener look behind the scenes and get a glimpse into the birth of these pieces.   "With the smart use of lots of colour, tiny tone shifts and brilliant moments, Szesztay provides the foundation, working together with Szegő in a complex way, while Kezdy is obviously the protagonist without dominating the game stream despite her huge playing field. The reason for this is the very exciting, attention grabbing way of playing which pulls you along even during the more meditative episodes. (...) I admit until now I had some doubts about Kézdy's violin sounds, partly because I thought it was hard to come up with something new after Jean-Luc Ponty. But now I can hear a completely new sound, filled with passion (...) something has been accomplished, the autonomous passion of creation made way for itself and the result is the best album of Santa Diver so far." (Végső Zoltán, Élet és Irodalom, 2020. February 28.)

All About Jazz musician pages are maintained by musicians, publicists and trusted members like you. Interested? Tell us why you would like to improve the Blue Horizon musician page.