Bob Boguslaw and The Way

The Way has been performing together in one form or another since 1995. The group has received critical acclaim from Jazz Times, All About Jazz and Beyond Coltrane for their Summit Records CDs, The Way and Gabrielle’s Hand. They have performed numerous times at the Kennedy Center, the Corcoran Gallery of Art and at Blues Alley. Musically, the group combines elements of Latin jazz, contemporary jazz, and some aspects of classical structure with lots of original compositions, as well as some re-workings of standards and pop tunes.

Aaron Clay concertizes with the critically acclaimed duo “Bridging The Gap”, and is principal bassist with the Fairfax Symphony.

Chris Rose, the most recent addition to the group, is currently the assistant principal percussionist with the U.S. Marine Band. He has appeared with the New York City Opera and the National Symphony, and worked five years with Andy Williams.

Frank Russo has received venerable praise from both Downbeat and Modern Drummer magazine. He is an Artist/Educator for Bosphorous Cymbals and also serves on the jazz faculty of Towson University.

All of these musicians are formidable soloists in their own right, and together they form a cohesive and unique jazz listening experience called The Way. Show less 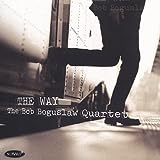 From: Gabrielle's Hand
By Bob Boguslaw and The Way

Bob Boguslaw and The Way

Help improve the Bob Boguslaw and The Way page

All About Jazz musician pages are maintained by musicians, publicists and trusted members like you. Interested? Tell us why you would like to improve the Bob Boguslaw and The Way musician page.