As Product Manager for Yamaha, Bob worked closely with major performing and recording artists during the development and introduction of new musical synthesizers. He has produced commercial music, sound design, and underscores for various commercial clients, and has programmed voice and sample libraries for recording artists and major manufacturers.

Bob previously earned a Bachelors Degrees in Performance and Composition from the University of New York at Fredonia. Bob was one of the first to work in the schools electronic music studio that featured a then brand-new Moog Model IIIC modular synthesizer, and in the school's 24 track music recording studio.

Bob has for many years performed in solo improvised jazz settings. He continues to perform solo piano gigs today.

Bob Frye CDs, including the new release “Uzoma” are available on CDBaby here: http://www.cdbaby.com/cd/bobfrye2 and on iTunes and Amazon.com.

Bob Frye Keyboard
”The best fusion groups do not sound like a hybrid but instead create their own individual identity and musical adventures. Bob Frye’s Uzoma features his fusion quartet playing on a high level, performing episodic and colorful music that is always joyfully unpredictable. Frye, who plays keyboards, synth and acoustic piano, is joined by electric bassist Ric Fierabracci, drummer Shane Gaalaas and (much of the time) guitarist Mike Miller. The leader contributed all nine originals, some of which were composed specifically for this CD. Uzoma is full of variety and high-quality fusion. Bob Frye’s CD is highly recommended.” “Uzoma” is available NOW at CDBaby: http://www.cdbaby.com/cd/bobfrye2

“An ear for the unique and the guts to take it to the edge” “Finely crafted solo explorations, heartfelt and commanding” “Wonderful facility and imagination” “Dripping with evocative mood” “Well conceived and delivered” “Stunning improvisations” Taxi Music News 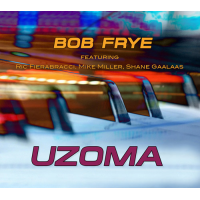 All About Jazz musician pages are maintained by musicians, publicists and trusted members like you. Interested? Tell us why you would like to improve the Bob Frye musician page.