Kevin “Brandino” Brandon is a seven-time Grammy-awarded Producer, Composer, Arranger and Bassist. His latest Grammy nomination was for the album Singularity by Robby Krieger of the Doors, nominated Best Pop Instrumental Album of the Year 2011. Among other high-profile projects last year, Brandino worked on the December 14, 2010 release of Michael Jackson’s new album entitled Michael (expected to be a big seller in 2011). Though based in Los Angeles, Brandino is no stranger to the rest of the country’s musical hotbeds, including a recent trip to New York in November to participate in a Warwick Family Photo shoot with his friends Larry Graham and Bootsy Collins. Warwick makes basses by which all other brands are measured, and the “Warwick Family” is a carefully selected group.

The increasing industry demand for Brandino’s unique skills began in 2005 when the rap group OutKast won the coveted Grammy awards for both “Album of the Year” as well as “Best Rap Album of the Year.” An album on which Kevin performed and had the opportunity to work with producer Andre Benjamin (aka Andre 3000), Brandino has been on a non-stop flight to the top ever since. This included performing on such projects as the 2007Grammy-nominated “Album of the Year” and “Best Pop Vocal Album” by Justin Timberlake (FutureSex/Love Sounds), the 2006 All Star Tribute Record release for Luther Vandross (on which Brandino performed on the Grammy winning songSo Amazing by artists Beyonce and Stevie Wonder), the 2006 Grammy “Best R&B Album of the Year” Breakthrough by Mary J. Blige, plus a standout performance at the American Music Awards with Jamie Foxx.

Brandino also works within the television industry, and his credits include three Emmy Awards for his work in 1985, 1986 and 1992 as a composer for the daytime soap opera “Santa Barbara,” plus for reality shows Gene Simmons – Family Jewels, The Millionaire Matchmaker, Pit Boss, The Squeeze, Rehab: Party At The Hard Rock Hoteland It Only Hurts When I Laugh. Brandino is finishing up his song book series with “Brandino’s Melodies and Songbook ” Vol. 2 using the Sibelius music writing software for his volumes of books for Bass, Treble and Bass &Treble instruments combined: a collection of compositions from his three solo albums.

Brandino’s seven Grammy and three Emmy awards reflect his love and dedication to the entertainment industry.

Brandino’s humanitarian organization for inner-city youth, called “You Can Do It If You Try,” is now affiliated with the broadcasting unit start-up South Central TV (SCTV), along with new programs targeted at the disadvantaged and disabled. These programs have been co-developed by Brandino’s non-profit and SCTV, which began broadcasting in the summer of 2017.

Stay Tuned for more details and ways to show your support for this noble effort. 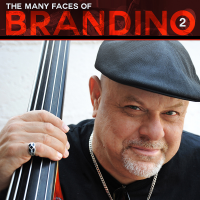 The Many faces of...

All About Jazz musician pages are maintained by musicians, publicists and trusted members like you. Interested? Tell us why you would like to improve the Brandino musician page.