In the mid-‘80s, India-American composer and tabla percussionist Broto Roy (an EMI-India recording artist) began composing and recording a genre of music he calls “Raga-Jazz”, an amalgam of ancient Indian ragas (melodies), talas (rhythms) and western Jazz. His mastery over the complex, formalized rhythms of his native India combined with his deep appreciation and understanding of the Jazz idiom led the Washington Post to declare his music “spiritual and visceral”. He was Artist in Residence at the Kennedy Center’s inauguration of their Millennium Stage. His CD “Total Immersion” is only the second live recording sanctioned by the Kennedy Center for public release (the first was by Pavarotti). His debut CD “American Raga” was played aboard the International Space Station when Dennis Tito carried it with him as he orbited the earth. His Broto Roy Quartet, consisting of sitar, tabla drums, tenor sax and electric bass, released “All Barriers Fall” (May 2018) and June 2015 released “Ancient Algorithms” - all and more at Amazon and iTunes.

His third CD “Live at the Lowell Festival” (near Boston, USA) was released in 2003 (Buzkhashi) by the Broto Roy Trio featuring the great Indian “sarodist” (Indian bass-lute) Aashish Khan and violinist Shashi Dhar. His Bengali folk ensemble GANGA released their CD “Setting Down Roots” in '08 (Buzkhashi). In 2011 GANGA released “Bringing It Home”, a compilation of live tracks from their concerts at the Library of Congress’ Coolidge auditorium; the Metropolitan Museum of Modern Art (New York City); Festival of American Folklife (July 4th) and many others. EMI-India re-released “American Raga” with worldwide distribution by Virgin Records in '09.

As a dedicated teacher on the side, Broto also performs with his students. See tabla concerto video at http://www.youtube.com/watch?v=noQx5014RBE. He received the Virginia Master Folk Artist award from the Virginia Foundation for the Humanities and taught in the DC public schools for three years. His numerous college performances, both for general audiences and music conservatories feature an educational component highlighting the rich history and science of Indian classical music theory and its modern practice. Some college concerts include: Sussex College, New Jersey; Mount Holyoke; Colgate University; Yale University; University of South Carolina at Columbia; State University of New York at Syracuse and Oswego; and eight campuses of Pennsylvania State University from Erie to Pittsburgh. On November 14, 2013 Broto lectured on India and performed at Harrisburg College, Pennsylvania and on January 9, 2014 he delivered a lecture at University College at the University of Maryland. The National Endowment for the Arts has awarded Broto two teaching grants in 1986 and 1993.

Broto is particularly proud of composing the song “Let Us Fly” for the Art & Drama Therapy Institute of Washington, DC's disabled and mentally handicapped clients. CNN World News broadcast the premiere of “Let Us Fly” on July 17 and 18, '04 and said his was “a story of amazing determination to be heard & recognized” and called him “Grammy bound”. See CNN & NBC https://www.youtube.com/watch?v=XsvkKKUdwiA coverage. Broto was nominated in the Instrumental category by his peers for the 2012 WAMMIE (Washington Area Music Awards). Currently Broto is busy recording his 7th CD of original compositions further exploring the fusion between Indian classical music and jazz. The new CD is due in early 2015.

Bluesy, spiritual odyssey. The complex rhythm seems to flow in and out of improvisations that can have the swing and fire of Bird one moment or the discipline of Ravi Shankar the next. Truly original - District Curators Intricate rhythms - The Folklore Society 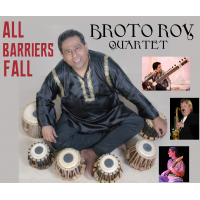 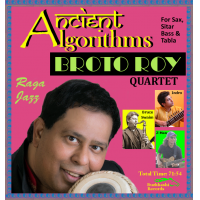 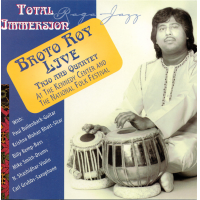 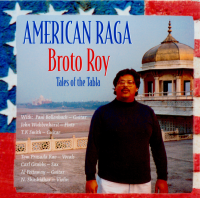 From: All Barriers Fall
By Broto Roy

All About Jazz musician pages are maintained by musicians, publicists and trusted members like you. Interested? Tell us why you would like to improve the Broto Roy musician page.