Bruce Gertz Quintet Kicks of Jazz at the Arsenal Series in Watertown on...

About BLUEPRINT: ”This music is an association between viguor,(up tempos) and passion of knowledge.It satisfies the spirit giving peace of mind” Jazz Magazine,France A disc of indispensable fire...the bebop with vision of the future' (Cd of the month) Mateu Serra,Audio Mag,Spain ”Just about every song features a solo by Bruce Gertz and the're all great. His modal,post bop and swing derived harmonies and melodies prove he's equally versed as a player and as a writer...give the disc a listen.it would satisfy even the most discerning jazz palette,leaving you wanting a second helping' Mattewh Bowman,New England Performer

About THIRD EYE: Once again the members of the Bruce Gertz quintet have revealed themselves to be a master of the art of music” Charlie Banacos ( Master,Jazz teacher and Pianist ) Beatiful compositions..Great Playing.. Great Album...Killin!” Mike Stern They say that those who can't do teach-but guess what:Bruce Gertz can teach and do.In addition to his duties at Berklee College,he leads a first rate quintet that plays some of the freshest,most cliche'-free jazz around.It's epecially rewarding music for bassist to listen to because Gertz lays down powerful walking lines on the acoustic and then switches to lyrical melodies (with chordal accompainment) on the electric.in short,he's got all the basse covered. Jim Roberts ,Editor, Bass Player Magazine , ”The Angular lines and beatiful singing sound of Gertz's bass is textually intriguing,as well as awesome” Tim Price ”His support work pushes and pulls with just the right tensionat the other lines under,over and around him.His solos are melodically compelling and effortless” Stu Vandermark,Cadence ”All of the numerous musicians that have worked with Bruce will tell you he's a monster” Bob Blumenthal,Boston Globe In my opinion and in the opinion of many other excellent musicians that i know,Bruce is a great bass player and teacher. Mike Stern 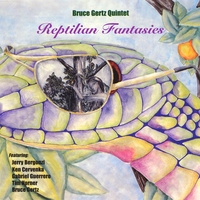 All About Jazz musician pages are maintained by musicians, publicists and trusted members like you. Interested? Tell us why you would like to improve the Bruce Gertz musician page.