Buck Clayton first rose to national fame as the lead soloist with the first great Count Basie band that roared out of Kansas City in late fall, 1936. Ironically, while Clayton’s understated, bell-like sound is associated with the hard swinging Kansas City style, he actually spent little time in Kansas City. By the time he arrived at the famed Reno Club, a small dive on 12th Street, Clayton had already led a colorful career as a band leader, ranging from Los Angeles to Shanghai.

Born in Parsons, Kansas, Clayton grew up in a musical family. Clayton’s father, a minister, taught him the basics of music. Picking up the trumpet as a teenager, Clayton performed with the church band, featuring his mother on organ. He first heard the clarion call of jazz during a stopover by the George E. Lee band in Parsons. After high school, Clayton followed his muse to California, where he began his professional career.

In 1934, the Clayton band opened at the palatial Canidrome Ballroom in Shanghai, China, becoming one of the first bands to play the Orient. Madame Chiang Kai- Shek and other celebrities flocked to the Canidrome nightly to sway to a potent mixture of hot jazz and classical music performed by the band, decked out in tails. The Clayton band spent the next two years at the Canidrome, with a short jaunt to Japan. A melee with a former Marine that turned the dance floor into a roiling free-for-all cost Clayton the job at the Canidrome. Unable to find steady work in Shanghai, Clayton and what remained of the band returned to the United States.

Back in the Los Angeles, Clayton reformed the big band and played several seasons at Sebastian’s Cotton Club and Club Araby. In the summer of 1936, Clayton left for New York to join Willie Bryant’s band at the original Cotton Club. On his way east, Clayton stopped off in Kansas City and joined the Basie Band at the Reno Club, replacing Hot Lips Page as star soloist. Clayton’s solo excellence, arrangements and compositions bolstered the national rise of the Basie band. Clayton remained with the Basie band until he was drafted in 1943.

After his discharge in 1946, Clayton led a small group at Café Society and toured nationally with the Jazz at the Philharmonic. During the 1950s, Clayton toured Europe with his own group and freelanced with Joe Bushkin, Jimmy Rushing, Frank Sinatra and a host of other band leaders. Clayton recorded widely as a sideman and a leader, cutting a series of jam sessions for the Columbia label produced by John Hammond.

Sidelined by lip surgery in 1967, Clayton focused on composing and arranging for other groups. He returned to playing in the early 1970s and toured internationally with his own group. When his lip gave out for good in the late 1970s, Clayton returned to directing, composing and arranging, while teaching at Hunter College in New York. In 1987, Clayton formed a big band to perform his compositions. Clayton continued creating and leading his “Swinging Dream Band” until his death in 1991. 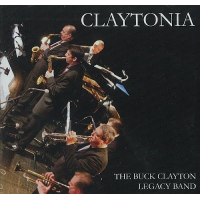 All About Jazz musician pages are maintained by musicians, publicists and trusted members like you. Interested? Tell us why you would like to improve the Buck Clayton musician page.