Buster Keaton was almost literally “born in a trunk.” His parents had stopped in Piqua, Kansas in early October, 1895 while performing with a traveling medicine show. Myra Keaton missed playing the saxophone at the October 4th performance when Buster arrived, delivered in a boarding house just across the street from the site of the evening performance. Young Keaton began appearing on stage with his parents at a tender age, became a child vaudeville star on Broadway, and earned a reputation as a comic genius in the world at large with a body of classic silent film comedy. He died in California in 1966.

Cliff Edwards known as Ukulele Ike, was very friendly with MGM's comedy star Buster Keaton, who featured Edwards in three of his films. Keaton. himself a former vaudevillian, enjoyed singing and would harmonize with Edwards between takes. One of these casual jam sessions was captured on film, in Doughboys (1930), in which Buster and Cliff scat-sing their way through “You Never Did That Before.” Buster was battling a drinking problem at the time, and Cliff was nursing a drug habit, both of which are unfortunately evident in the finished film. In scenes when Keaton is sharp and alert, Edwards appears befuddled; when Edwards regains his sobriety, Keaton is now stumbling and fumbling. (Edwards was ultimately replaced in the Keaton films by Jimmy Durante.) 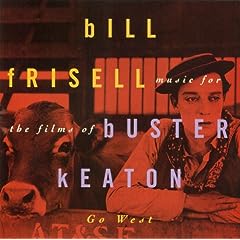 Music for the Films...

All About Jazz musician pages are maintained by musicians, publicists and trusted members like you. Interested? Tell us why you would like to improve the Buster Keaton musician page.