Carl Grubbs alto, soprano and tenor saxophonist, is a native of Philadelphia, PA.

He received early training from John Coltrane, who was married to his cousin, Naima. Through his family he was close to many of the history-making musicians of the 1950’s and 60’s. He was a guest soloist at the Philadelphia performance of Reggie Workman’s current project “African Brass”, a tribute to John Coltrane.

Carl’s career can best be described as one of diversity; composer, performer, teacher, leader, recording artist and presenter. With his late brother, Earl Grubbs he formed the Visitors, a quintet that recorded for Muse record label in the early 1970’s. Carl is a former member of the Julius Hemphill Saxophone Sextet; this group toured the United States and Europe performing two productions; Hemphill’s Long Tongues:

Carl Grubbs & Friends performs in major cities in the US; they have also been invited to perform in the cities of Bogota and Medellin, Colombia, S.A. Most recently the group completed a successful eight-city tour of Brazil. On his tours he provides Jazz improvisation workshops to students and professionals.

Currently Carl is Artist in Residence at St. Paul School in Brooklandville, Md. He is an adjudicator for the Maryland State Scholarship program. He has conducted workshops in jazz improvisation in Baltimore City Public Schools under the sponsorship of The Eubie Blake Jazz and Cultural Arts Center. Since 1997 he has served as the Director of SAX: Summer Music & Dance Camp, a camp he founded with his wife Barbara. The two-week camp is held on the campus of Loyola College in Maryland. It provides music and dance education to youth ages 4 - 17 in the Govans community and Baltimore City.

In recognition of his musical accomplishments, Carl was awarded the 2009 Baker Artist Award. Carl has twice received a National Endowment for the Arts Grant (1983 & 1985). In 2003 his CD Stepping Around The Giant, was voted “Best of Baltimore” CD by Baltimore magazine. He has twice received the Maryland State Arts Council/Maryland Traditions award as a jazz master, working with apprentices David Lowe (Bassist) and Lafayette Gilchrist (Pianist), to pass on the traditions of the jazz art form.

Currently the Carl Grubbs/Lafayette Gilchrist is recording The Traditions Project: Marylanders in Jazz, which celebrates the music of Eubie Blake, Chick Webb, Billie Holiday, Albert Dailey and Carl Grubbs. Carl’s has produced three CD’s on his own label, B&C Productions. These are: Reflections (2003;, Live at the BMA: Inner Harbor Suite(1994); and Live at The New Haven Lounge. Live at the BMA: Inner Harbor Suite received great reviews in Jazz Times and Downbeat magazines. Additional recordings on the CIMP label are Brother Soul (2006), Two Dreams (2004), The Odean Pope Trio CD, and Stepping Around The Giant (2003). Carl Grubbs can also be heard on Fat Man and the Hard Blues, recorded by The Julius Hemphill Sextet on Black Saint label. 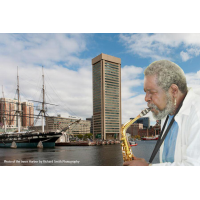 All About Jazz musician pages are maintained by musicians, publicists and trusted members like you. Interested? Tell us why you would like to improve the Carl Grubbs musician page.