“Carol Fredette is everything you need in a jazz singer. She thinks, swings and phrases like a creative instrumentalist, yet her way with words captures the essence of a lyric,” says critic Dan Morgenstern, one of her many fans. Her deep expressive voice, strong sense of swing and charismatic presence have wowed audiences, critics and fellow musicians the world over. Fredette’s reputation has continued to grow as a fine educator, vocal coach and record producer.

As a kid growing up in the Bronx, Carol was weaned on the music of Chet Baker, Stan Kenton and Frank Sinatra. Barely 18 and fresh out of Florida State University, where she sang regularly with the college jazz band, she hit New York and immediately landed a gig at Greenwich Village’s infamous Page Three. At “The Page,” Carol formed close relationships with Sheila Jordan and Dave Frishberg, which have lasted to this day. Around the same time, she worked opposite Bobby Short at The Arpeggio and when Carol auditioned for the Sal Salvador band at Basin St. East, she was hired on the spot. She then toured country-wide with his 17 piece band which included Eddie Gomez, Mike Abene, and Ronny Cuber. Stints with Larry Elgart and Neal Hefti followed and eventually Carol started touring with her own bands -- one of which included guitarist John Scofield. This led her to headline as a solo performer across three continents.

Off the road and back in New York, Carol settled quickly into the NewYork Jazz scene. She’s headlined every major jazz club including the Blue Note, Birdland, Michael’s Pub, Fat Tuesday’s, Café Carlyle and is a favorite at the Midday Jazz Series at Citicorps Center. She’s appeared twice in concert at Pace University, once opposite Buddy Rich and the other with an all Brazilian program. Carol’s also performed at the Vintage Jazz Series at the Vineyard Theatre and is about to make her 25th appearance at the long standing Monmouth County Library concert series.

Around the country, she’s done stints at Scullers and Regatta Bar in Boston, Milestones in San Francisco, Vine Street in Los Angeles, and Stephen’s After All in Chapel Hill, NC. Highlights of her concert and festival appearances include The British Embassy in Washington, D.C., where she performed John Dankworth’s jazz interpretations of Shakespeare’s poems and sonnets, the Kansas City Women’s Jazz Festival, the Corcoran Gallery in Washington, D.C. with Richard Rodney Bennett, the American Popular Song series with Loonis McGlohon in Charlotte, NC, and a much acclaimed program with Dave Frishberg at the University of North Carolina. She’s won fans around the world on the QE2, SS Rotterdam, Banlieues Bleues Jazz Festival in Paris, Veinte-Un in Rio, Cancun Jazz Festival, The Queen Elizabeth Hotel in Montreal and Regine’s in Paris.

Of Carol’s debut recording LOVE DANCE, Cadence Magazine proclaimed, “She delivers a performance as definitive and riveting as any I’ve ever heard.” Other CDs include IN THE SHADOWS, an intimate duo gem with long-time collaborator Steve Kuhn, AND THEN IT HAPPENED, a collection of original songs written and produced by David Matthews, EVERYTHING I NEED, the songs of Bob Dorough and Dave Frishberg. Fredette’s spot-on interpretations have made this album a favorite amongst critics and D.J.’s, winning the Blue Chip CD Award from Jazz Educator’s Journal. “One of the hippest vocal albums in many a year.”--Jersey Jazz Magazine. Her new release on Soundbrush Records, EVERYTHING IN TIME, produced and arranged by David Finck, is scheduled for release in February of ’09. With choice offerings from the American Popular Songbook, it also showcases her passion for Brazilian songs and rhythms. According to Finck, “this disc offers the listener…insight into Carol’s qualities of joy, sadness, sensuality, humor, hope, and most of all, love.”

In addition to performing and recording, Carol is inspiring interest and love of jazz in the next generation of singers. She has conducted master classes and vocal jazz workshops at City College, Duke University and Jazz Mobile in Harlem as well as teaching privately.

About her career, Carol says, “…singing this music is ultimately about swinging -- and bringing the words of a song to life from one’s own experience, so that the words written by someone else become YOUR words, YOUR story…and ultimately the story of your audience. I am so lucky to have had the opportunity to play with, and learn from, so many great musicians. Sharing the marriage of lyrics, music and the rhythms of jazz with other musicians, audiences and students--has been a blessing and a gift. Show less

No Sad Songs For Me 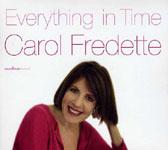 All About Jazz musician pages are maintained by musicians, publicists and trusted members like you. Interested? Tell us why you would like to improve the Carol Fredette musician page.