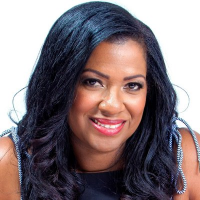 Chicago native Carolyn Fitzhugh affectionately named “Songbird” by her adoring fans is a timeless song stylist who possesses the grace, elegance, and improvisational skills of the legends of yesteryear while capturing the attention and affection of all ages.

Carolyn’s childhood home was filled with the music of a diverse assortment of music greats from Miles Davis, Oscar Peterson, John Coltrane and Ella Fitzgerald to Morgana King and Sarah Vaughn to Minnie Ripperton, Ray Charles and Earth, Wind & Fire!

Carolyn began taking classical piano lessons at age 5 and soon after she started making up melodies on the piano, as she adds “my early days of composition.” It was now she felt the emotion to sing and play and soon after what would become a 3-octave voice was born, and the fire to sing, play the piano and entertain was lit never to extinguished!

As Carolyn further reminiscences “In my teens, I fell in love with jazz piano and the captivating technique of the likes of Herbie Hancock, Oscar Peterson, Ahmad Jamal, Chick Corea, and McCoy Tyner quickly became my favorites.” In addition to those masters Carmen McRae, Shirley Horn, Joe Williams and Stevie Wonder are also influences on Carolyn and are collectively reflective in her writing and singing!

With influences like these genius’ and her desire to shape her own sound Carolyn has become an innovative composer as her 5 exceptional compositions on her debut CD demonstrate. Certainly, studying classical voice at Chicago’s Roosevelt University for 2 years, also in Chicago attending the Bloom School of Jazz where her instructor was David Bloom she studied jazz vocal improvisation and jazz small combo improvisation for piano which heighted Carolyn’s composing and arranging skills!

As the result of studying at Bloom, Carolyn shares “while studying jazz at Bloom School of Jazz I developed a gift for incorporating the improvisations that I so love in my favorite jazz pianists into the jazz vocal expression. So, as I compose music and lyrics I draw from the beautiful jazz piano, the melodic drum.” Carolyn is best known for her expertise in jazz vocals, but she is also well versed in contemporary music and gospel!

All the vast experiences of Carolyn Fitzhugh were poured into the production of her debut CD, SIMPLY AMAZING which was released in November 2016. Carolyn displays her dynamic talent as an amazingly gifted singer, songwriter, arranger and now she can add record producer to growing list of music abilities and accomplishments! Regarding the CD’s release Carolyn reflects “Simply Amazing’s release is the manifestation of promises kept. I am simply amazed that this season is the perfect season for this release!”

Simply Amazing has captured her refreshing voice and rich tones that soothe the senses while maintaining remarkable control. She demonstrates in her flawless use of vibrato. while her amazing range and power are both delightful and playful sending a message to the listener that she wants them to play along. This project has been described as “refreshing, simply amazing, sweet and tender and sound shifting!

The concernment professional on stage Carolyn has performed in a multitude of venues in the Chicagoland area and throughout the Midwest. Carolyn has been featured at Andy’s Jazz, Café Luciano’s Restaurant, Jazzology, The Drake Hotel, Room 43 and Gallery Guichard to name a few.

Carolyn’s passion for music and entertaining her audience is immediately displayed and felt in the first few seconds of her performances. She keeps her audience captivated throughout the duration of each performance leaving them yearning for more. With Simply Amazing Carolyn Fitzhugh’s next stage are certain to be those of the world! Show less

All About Jazz musician pages are maintained by musicians, publicists and trusted members like you. Interested? Tell us why you would like to improve the Carolyn Fitzhugh musician page.