Cathy DeWitt was destined to be a musician, and playing jazz is in her blood. Before she was born her father Bruce led his own band in New Orleans, regularly opening for Louis Armstrong at Pete Fountain's place. At a very early age music filled her house, from her father's Dixieland trumpet and stride piano to the Rachmaninoff and Chopin pieces her brother Peter, a prodigy pianist, rehearsed every day on the grand piano in the living room. As the family gathered to watch the television variety shows of the 60s, she heard all the famous singers interpreting the great songbook of jazz and show tunes, and she never forgot the lyrics to many of those songs.

After honing her harmonic skills as a member of the University of Florida Choir and Willis Bodine's Chamber Singers, Cathy met and began performing with jazz guitarist Charlie Bush. This was the beginning of her career as a jazz singer, which led to performances throughout Florida, as well as New York, California, London, Hawaii, and the Virgin Islands. After Charlie's untimely death in 1984 she formed her own band, MoonDancer, which is still playing today.

An award-winning composer, she has two songs which placed in Unisong's International Songwriting Contest (competing with over 4,000 entries from nearly 100 countries)in the Jazz and Overall Performance categories: “Everybody's Somebody's Child” in 2006 and “I Get Spring Fever in the Fall” in 2007. Her doo-wop tune, “Slow Dancin'” reached the semi-final status in ISC's 2007 songwriting contest.

As a guest vocalist, Cathy has sung at Dizzy's Club Coca Cola in New York with Bobby Sanabria, Rue B in New York with Rob Bargad, and Pearl's in San Francisco with Bruce Forman. A board member of the Gainesville Friends of Jazz & Blues, she has produced and/or performed in many concerts, singing with great musicians including pianists Dave Frishberg, Frank Sullivan and Rob Bargad, guitarists Larry Camp and Mark Fox, and bassists Walter Booker and Mark Neuenschwander. Several of these concerts were recorded for broadcast by the local public radio affiliate, WUFT, and make up the basis of her album, Love Notes.

Read more articles
”There are few people who I listen to over and over, and Cathy DeWitt is one. There is a quality about her voice that is so inviting and warm. The range of her voice is amazing.” Christina Tourin, Director, International Harp Therapy Program, classical and jazz harpist.

”Cathy DeWitt's song 'I get Spring Fever in the Fall' is a modern day standard. If you hear someone say, 'They don't write songs like they used to,' you can correct them and say, ‘Oh yes they do!’ And then play them this gem of Cathy's.” - Christine Lavin, deejay, Sirius Satellite Radio.

Vocal Improvisation—how to make the most of YOUR instrument. (Voice) Through scat singing, listening and repeating lines, and a small amount of basic theory, participants will learn how to sing around the melody and behind the beat, use phrasing that fits the context of the words, and other important tricks and techniques of great jazz vocals. 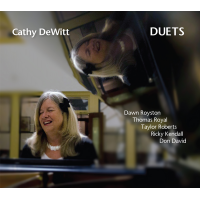 All About Jazz musician pages are maintained by musicians, publicists and trusted members like you. Interested? Tell us why you would like to improve the Cathy DeWitt musician page.