“Do your kisses stir my soul? Do I think you make me whole? Should I sigh and lose control?” So begins the title track of Celia Ramsay's new release, “I'll Just Lie About It.”

The new album debuts Celia as a songwriter—a new hat for her to be sure, but one that fits her very well. Some of her songs are pure blues, others are a humorous “Ella Fitzgerald meets Mark Graham” mix. Either way, the album is nicely balanced between dark blue songs and upbeat, sometimes bawdy humor.

Celia has been singing since she was a little girl, and grew up with a personal passion for the ballads of Scotland. At the same time she was heavily influenced by popular music from the 1930s and 1940s. She's the first to point out that the jazz ballads from the mid-century and much older ballads from the British Isles have a lot in common. Both traditions lean heavily on songs about love, and its trials, tribulations and triumphs. A self-taught musician with a keen ear, she feels her middle age blossoming is right on time. “I'm an empty-nester, and being self-employed, I now have enough flexibility with time to be able to pour myself into this lovely, magical thing in my life—music.

Celia Ramsay has been indulging her artistic side most of her life. She was a letterpress printer in her 20s. When she met her husband, Kent Rasmussen in 1986, they dove into self-employment by starting a winery in a garage, and have been highly successful since—even to the point of moving OUT of the garage. For a time, business kind of got in the way of artistic pursuits, but eventually she was asked to sing in a Bluegrass Band when the couple's children were small. Over time she began to call contra dances—which means she would teach and then prompt the dancers to live music. And now she's moving out into the SF Bay Area music scene.

Discography: May 2012: I'll Just Lie About It released January 2011: Songs of My Father's People; Mostly Scottish Songs About Love 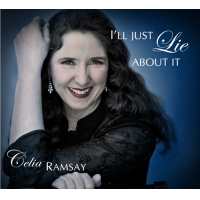 I'll Just Lie About It

All About Jazz musician pages are maintained by musicians, publicists and trusted members like you. Interested? Tell us why you would like to improve the Celia Ramsay musician page.