It could never be said that China Moses and Raphael Lemonnier were fated to join forces on a project, given their rather different career paths and the seeming absence of any compelling reason for the two artists to meet.

As an MTV host, singer, author, songwriter and producer, China is first and foremost an eclectic artist who embodies the American idea of an entertainer. This aspect of her personality can be traced to her childhood, steeped in music and the world of theatre. From her mother, the singer Dee Dee Bridgewater, she inherited the ability to work towards long-term goals. Her father, Gilbert Moses, who died in 1995, was a committed television and film director responsible for series like Roots and the cult film Willy Dynamite, who taught China the value of hard work. Just before he died, Gilbert prophetically saw his daughter take on duties for Virgin Records. His hopes came to fruition when she signed with Source, a Virgin subsidiary. Her first single, Time, was released in 1996, whereupon her career took off thanks to her first video, directed by Jean-Baptiste Mondino. This was followed by three albums: China (1997), On Tourne en Rond (2000) and Good lovin' (2004). Subsequent collaborations with MeShell NdegeOcello, Bob Power, Etienne de Crecy, Guru, Mounir Belkhir, Diam's, Camille, Fabe, Dj Mehdi and Karriem Riggins cemented her reputation in the world of alternative R'n'B.

The career of pianist Raphael Lemonnier has been focused more on jazz. He made his debut with the Nimes Big Band under the direction of Jeff Gilson and later Roger Guerin. In 1986, over the course of a year in New Orleans with Guy Labory's Creole Jazz Band, he developed a passion for boogie-woogie, which he studied with Philippe Lejeune. The teaching he received from the pianist Philippe Duchemin made an important contribution as well. On becoming a professional musician in 1997, he moved to New York to study piano with Jaky Byard. There he recorded his first disc, entitled Raphael Lemonnier Trio and intended as an homage to Erroll Garner, one of his primary influences along with Oscar Peterson, Earl Hines{{ and {{Count Basie. Upon returning to France, he studied musical notation with Ivan Jullien and released the album Septet Jazz, dedicated to Billy Strayhorn and Duke Ellington. In 2004, in partnership with Chris Gonzales, he mounted the show Dancing, a production of the Theâtre de Nimes. Extensively involved in France's jazz scene, he performed with Liz Newton at numerous events: the Tangier Jazz Festival, The Village Gate, Jazz in Montauban and the 24 Hours of Swing festival in Monsegur. At the same time he was composing music for television, notably the Arte network.

The one thing that was needed to bring these two artists together was some deeply shared passion, and that was jazz, an integral part of China Moses's upbringing. And the opportunity was provided by Camille, a prominent French songstress, who was performing at Paris's Cafe de la Danse. Invited by the singer to join her musicians on stage for two songs, Raphael, who wisely keeps his ears on the alert at all times, heard the voice of China, who at the time was one of Camille's backing vocalists, and asked her to perform in Dancing. And from there, the rest was fate: while the two were on a drive through the Camargue, the car radio played a song by Dinah Washington, their mutual idol. Raphael had been a fan of the singer for many years. And China had secretly listened to Dinah Washington records at the home of her grandmother, who deemed the singer's lyrics too suggestive for young ears.

So why not put together a show devoted to Dinah Washington? Stephane Kochoyan, program director for the Nimes Metropole Jazz Festival and director of the Jazz 70 association, was thrilled with the idea, and the project, titled Gardenias for Dinah, began to take shape. The actor Henry Le Ny was enlisted to sketch a portrait of the singer against a musical background comprised of period audio recordings collected by Raphael. This was followed by a concert in which China performed songs from Dinah's repertory backed by Raphael, Regis Maurette (dms) and Alain Resplandin (b), later replaced by Jean-Pierre Derouard and Fabien Marcoz respectively. Daniel Huck, offering his services as a friend and neighbour, rounded out the team. Buoyed by their success, the group opened for Dee Dee Bridgewater when she performed at the Nuit des Jardins music festival in Nimes and at the Montauban and Monsegur festivals. Each of the performers began to take a greater role, while the group became more cohesive and everyone had a great time. The natural next step in marking their success was a tribute disc: This One's For Dinah. Raphael wrote the arrangements and collaborated with China on the song selection; Francois Biensan handled the orchestrations and chose the brass players: Francois himself (tp), Frederic Couderc (sax), Aurelie Tropez (sax, cl), Jean Onesta (tb) and Daniel Huck (sax), while the rhythm section was made up of Jean-Pierre Derouard (dms), Fabien Marcoz (b) and Raphael Lemonnier (p). The disc was recorded in the old style: all the musicians performed together and the best take was used in its entirety for the actual release.

For China Moses, who handled vocal duties, this adventure represented a challenge, given the all-consuming personality of her idol, Dinah Washington. Known as The Queen of The Blues, Dinah Washington was one of the most important female singers during the 1950s and 1960s. Born Ruth Lee Jones in Tuscaloosa, Alabama, on 29 August 1924, Dinah moved to Chicago at a very young age and grew up playing church piano and haunting the city's nightclubs. Capturing the attention of the prominent gospel singer Sallie Martin, she was invited to go on tour, first as a pianist and later as a solo vocalist, where she gained valuable experience in refining her art by assimilating the mannerisms of gospel singers. Dinah's next stop was with Lionel Hampton's orchestra (1943-1946) where, according to (now disputed) legend, she was given the name Dinah Washington, thought to be more marketable. In 1946 she signed with Mercury and recorded a series of blues tracks whose double entendres delighted the black audience (TV Is the Thing This Year, Long John Blues) and pushed her to the top of the charts. Consolidating her success with I Don't Hurt Anymore (1953), she began her quest for the white audience in 1959 with What a Difference a Day Makes, which made a triumphant appearance among the year's top 50 recordings. Embracing a full range of styles, Dinah recorded with the likes of Max Roach, Clifford Brown, Eddie Davis, Clark Terry and Wynton Kelly, giving performances that showcase her infallible music sense, impeccable timing, crystal-clear diction and the ability to personalize her interpretation by adding just the right show of emotion. Quincy Jones devised some arrangements for the singer that count among the best of his career. Upon leaving Mercury in 1962, Dinah began recording tracks for the Roulette label that were sometimes more commercial but maintained a very high level of quality. During this period, Dinah was a hugely popular star and a true diva in her behaviour both on and off stage. Her personality drove her to some unfortunate displays of excess and prompted a string of dramatic events. Her especially stormy personal life--she had an impressive number of husbands and lovers--was not always a happy one. Sensitive about her increasingly visible weight gain, she began taking diet pills. On the night of 14 December 1963, a combination of sleeping pills and alcohol proved fatal. She was just 39 years old. Her uncommon artistic abilities enabled her to excel in every genre: blues, gospel, jazz and high-grade pop, and she was a model for vocalists of the calibre of Dionne Warwick, Esther Phillips, Nancy Wilson, Etta Jones and Diana Ross.

So the bar was set quite high for China, who had the artistic intelligence and good taste to pay tribute to Dinah by emphasizing spirit over form--in other words, by relying on her own talent. Thoroughly immersed in Dinah's world, she sings the blues with a lovely authority highlighted in Dinah's Blues, one of China's own compositions. And it's a good thing too, because with songs like Evil Gal Blues, Fat Daddy and Fine Fine Daddy, a close approximation won't do. China is also a remarkable interpreter of standards, as seen in her clever handling of Cry Me A River and Goodbye, whose arrangements show off her voice to such impressive effect, and in the authentic emotion that emerges from Mad About The Boy and Teach Me Tonight, performed with great sensitivity and restraint. And all of this comes through in Gardenias for Dinah, another original composition. The various soloists perform remarkably well and in the proper spirit. The arrangements sound exceptionally vivid and the rhythm section drives the music forward with quiet strength. It's the beautiful tribute that Dinah deserved. Show less 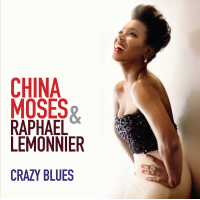 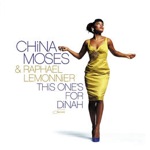 This One's For Dinah

All About Jazz musician pages are maintained by musicians, publicists and trusted members like you. Interested? Tell us why you would like to improve the China Moses musician page.