Chris’s debut recording in the States, Waltz For Debby (Discovery 1990), received outstanding reviews in several publications and features the official published lyric by Chris of the great Miles Davis classic, “Blue in Green.” In 1994 Chris was also honored to be selected as one of the six exceptional new jazz singers on the New York scene to be featured on the Venus recording, “Big Apple Voices”. Chris has gone on to record several CD’s since then, A Time for Love (Amosaya 1996), I Remember You (Mop Top 2004- re-released on Elefant Dreams 2006), Dance Delicioso (Elefant Dreams 2005) and her most recently released Whispers the Heart (Elefant Dreams 2006), during this time crossing over from lyricist to full fledged composer.

In between raising her only son Sam, Chris managed to maintain an active profile and presence on the international scene. Her touring schedule has taken her to all four corners of the globe and includes appearances at BAM’s presentation of the first Australian Arts Festival held at the Brooklyn Academy of Arts in 2001. She toured Russia with Paul Bollenback in 2002, 2003 and appeared in 2004 for the very first St Petersburg Jazz Festival. Their magnetic and captivating performances have led to ever increasing festival dates around the world.

Following the release of her highly acclaimed Dance Delicioso, Chris returned from successful festival appearances in both the UK and Ireland including the Brecon Festival in Wales and the Killarney Festival in Ireland. Along with national radio features throughout the States, UK, Ireland and Europe, her music has also been a major feature in Australia on ABC’s nationally broadcast program, “The Nightly Planet.” Dance Delicioso and Whispers the Heart have received major attention in the press and radio world wide, both making it onto the pre-nomination ballot for a Grammy nomination the last 2 years respectively.

Increasingly acknowledged by musicians, peers and critics alike as a jazz vocalist-composer with a unique vision, boundless creative energy and strong individual style. McNulty's risk-taking, fluid and powerful emotional approach, support, but never compromise her musical sensibilities. By simultaneously reinforcing and re-defining the boundaries for jazz singing as vocalist-composer, McNulty breaks new ground, on these last two recordings in particular. In short, she is a consummate musician with great pitch and control who can touch an emotional core with an audience in a way very few of her contemporaries can. As so aptly put by George W. Carroll from The Musician’s Ombudsman, “McNulty is capable of injecting emotion, pathos, irony & meaning into her work ...a gift that few singers can lay claim to.” Her compositions have been hailed as rich harmonically, melodically and lyrically and well worthy of the company they keep along side the great standards she continues to interpret and explore.

Chris McNulty has lived in NYC since 1988. She maintains an active touring schedule. Her 2006-2007 touring schedule includes several U.S tours, festival dates in Australia and tours to the UK, Ireland, Europe and Russia. Show less 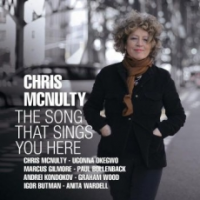 The Song That Sings... 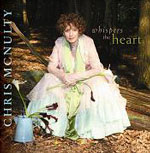 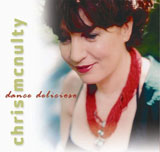 From: Eternal
By Chris McNulty

Summer Me, Winter Me

From: Whispers The Heart
By Chris McNulty

From: Dance Delicioso
By Chris McNulty

All About Jazz musician pages are maintained by musicians, publicists and trusted members like you. Interested? Tell us why you would like to improve the Chris McNulty musician page.