Chris McQueen has been playing, writing, and recording music since 1994. He plays guitar in the 3-time Grammy winning band Snarky Puppy, as well as the gritty instrumental quartet Forq, and world music group Bokanté. He has also worked as sideman for Lizz Wright, Banda Magda, Lucy Woodward, Nikka Costa, Myron Butler & Levi, Alejandro Escovedo, and other artists in Texas and New York. He has been featured in several rock musicals over the last decade, most recently David Bowie’s Lazarus at New York Theatre Workshop (featuring Michael C. Hall) and The Rocky Horror Show at The Dallas Theater Center. He also designed and built the Guitar Note Atlas, an app for iPhone and iPad to help guitar and bass students learn the fretboard.

Chris grew up in Austin, TX and started playing guitar and recording songs on a 4-track Tascam around age 10. At 13 he joined RedHeaded Stepchild, a western swing kid band, and started gigging around Austin and learning how to solo from bandmate and guitar prodigy Will Knaak. This interest in improvisation led Chris to jazz; he joined and wrote for his high school jazz band, and later attended the University of North Texas to study with Fred Hamilton. He eventually played in the One O’Clock Lab Band and wrote a piece that was recorded for Lab 2006.

Chris remained in the Dallas area for four years after college, co-leading the regionally popular rock band Oso Closo with singer/songwriter Adrian Hulet, and studying music with Bernard Wright and other members of the Dallas R&B/jazz/Gospel scene. Oso Closo performed on stage in The Who’s Tommy at the Dallas Theater Center and released two albums. After Oso Closo broke up, Chris and fellow band member Danny Garcia joined with singer/songwriter Cade Sadler to form Foe Destroyer, which produced one album, toured for several years, and performed on stage in Dallas and NYC in the musical Fly By Night.

Chris lives in Austin, TX with his wife Erin. Aside from gigging and recording he writes sheet music for Snarky Puppy and others, and he created arrangements and sounds for the new musical Bunkerville. He has also been working on an upcoming solo album, and he plays in an original acoustic guitar duo with fellow Austinite Matt Read that released its debut album Western Theatre last year. He has been producing videos for Guitar Note Atlas, which will be receiving a major update this year and finally coming to Android devices. Show less 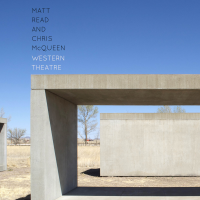 All About Jazz musician pages are maintained by musicians, publicists and trusted members like you. Interested? Tell us why you would like to improve the Chris McQueen musician page.