A world-class soloist, accomplished composer and formidable bandleader, saxophonist Chris Potter has emerged as a leading light of his generation. Down Beat called him “One of the most studied (and copied) saxophonists on the planet” while Jazz Times identified him as “a figure of international renown.” Jazz sax elder statesman Dave Liebman called him simply, “one of the best musicians around,” a sentiment shared by the readers of Down Beat in voting him second only to tenor sax great Sonny Rollins in the magazine's 2008 Readers Poll.

A potent improvisor and the youngest musician ever to win Denmark's Jazzpar Prize, Potter's impressive discography includes 15 albums as a leader and sideman appearances on over 100 albums. He was nominated for a Grammy Award for his solo work on “In Vogue,” a track from Joanne Brackeen’s 1999 album Pink Elephant Magic, and was prominently featured on Steely Dan’s Grammy-winning album from 2000, Two Against Nature. He has performed or recorded with many of the leading names in jazz, such as Herbie Hancock, Dave Holland, John Scofield, the Mingus Big Band, Jim Hall, Paul Motian, Dave Douglas, Ray Brown and many others.

His most recent recording, Ultrahang, is the culmination thus far of five years’ work with his Underground quartet with Adam Rogers on guitar, Craig Taborn on Fender Rhodes, and Nate Smith on drums. Recorded in the studio in January 2009 after extensive touring, it showcases the band at its freewheeling yet cohesive best.

Since bursting onto the New York scene in 1989 as an 18-year-old prodigy with bebop icon Red Rodney (who himself had played as a young man alongside the legendary Charlie Parker), Potter has steered a steady course of growth as an instrumentalist and composer-arranger. Through the '90s, he continued to gain invaluable bandstand experience as a sideman while also making strong statements as a bandleader-composer-arranger. Acclaimed outings like 1997’s Unspoken (with bassist and mentor Dave Holland, drummer Jack DeJohnette and guitarist John Scofield), 1998’s Vertigo, 2001’s Gratitude and 2002’s Traveling Mercies showed a penchant for risk-taking and genre-bending. “For me, it just seemed like a way of opening up the music to some different things that I had been listening to but maybe hadn’t quite come out in my music before,” he explains.

Potter explored new territory on 2004’s partly electric Lift: Live at the Village Vanguard (with bassist Scott Colley, drummer Bill Stewart and keyboardist Kevin Hays) then pushed the envelope a bit further on 2006’s Underground (with guitarist Wayne Krantz, electric pianist Craig Taborn and drummer Nate Smith). As he told Jazz Times: “I've wanted to do something more funk-related...music that seems to be in the air, all around us. But also keep it as free as the freest jazz conception.”

He continued in this electrified, groove-oriented vein with 2007’s Follow The Red Line: Live at the Village Vanguard (with guitarist Adam Rogers replacing Krantz in the lineup). Says Potter of the adventurous new path he’s carved out for himself with his bass-less Underground quartet: “There was a point where I felt like the context I had been using before wasn’t quite working to express what I wanted or to move forward in some kind of way. My aesthetic as a saxophonist has always been based in Bird and Lester Young and Sonny Rollins and all the other greats on the instrument. What I’ve learned from them in terms of phrasing, sound, and approach to rhythm I’ll never outgrow. However music’s a living thing; it has to keep moving. I’ve been touched by many forms of music, like funk, hip hop, country, different folk musics, classical music, etc., and for me not to allow these influences into my music would be unnecessarily self-limiting. The difficulty is incorporating these sounds in an organic, unforced way. It helps me to remember I want people to feel the music, even be able to dance to it, and not think of it it as complicated or forbidding. If I can play something that has meaning for me, maybe I’ll be able to communicate that meaning to other people, and the stylistic questions will answer themselves.”

With the ambitious Song For Anyone (released in 2007 also and dedicated to the memory of Michael Brecker), Potter flexes his muscles as an arranger on original material for an expanded ensemble featuring strings and woodwinds. “That was a learning process,” he says of this triumphant tentet project, “because I hadn’t done anything on that scale before. I just decided to sit down and write, and it was extremely gratifying to see how it translated into live performance.”

Looking back over his 20 years since arriving in New York, Potter says, “I’ve had the chance to learn a lot from all the leaders that I’ve worked with. Each gave me another perspective on how to organize a band and make a statement. It’s taught me that any approach can work, as long as you have a strong vision of what you want to do.”

His initial gig with Red Rodney was an eye-opening and educational experience for the 18-year-old saxophonist. “I wish I had had the perspective I have now to appreciate what a larger-than-life character Red was.” Potter's years with Paul Motian's Electric Bebop Band represented a wholly different approach from Rodney’s old school bebop aesthetic on stage. “Motian has really had a big affect on the way that I think about music,” says the saxophonist. “He approaches things from such an anti-analytical way. It’s so different than so many of the other musicians that I’ve had a chance to work with. Motian more relies on his aesthetic sensibility and his instinct. He’s basically just trusting his gut and he’s so strong about it that he can make it work. And it takes a lot of courage to do that.”

From bassist-bandleader Dave Holland he learned about the importance of focus and willpower. “Dave is determined to make his music as strong as possible and present it in the best way,” says Potter, who has been a member of Holland's groups for the past 10 years. “Playing with him, you have the feeling there’s this mountain standing behind you that you can completely rely on. Working with him over the years has helped me see the true value of believing in what you’re doing.”

Potter also cites his time on the bandstand with guitar legend Jim Hall as inspirational. “The way that he can be both melodic and sweet and deeply inventive and open-minded at the same time made a big impression on me,” he says. Touring and recording with the enigmatic duo of Donald Fagen and Walter Becker (Steely Dan) offered further insights into the artistic process. “They totally went their own way,” says Potter. “I have a lot of respect for them and their commitment to their art.”

And Potter has remained committed to his art since his formative years. Born in Chicago on Jan.1, 1971, his family moved to Columbia, South Carolina when he was 3. There he started playing guitar and piano before taking up the alto saxophone at age 10, playing his first gig at 13. When piano legend Marian McPartland first heard Chris at 15 years old, she told his father that Chris was ready for the road with a unit such as Woody Herman’s band, but finishing school was a priority. At age 18, Potter moved to New York to study at the New School and Manhattan School of Music, while also immersing himself in New York’s jazz scene and beginning his lifelong path as a professional musician.

Now a respected veteran (as well as a new father), Potter continues to work as a bandleader and featured sideman. Surely many interesting chapters await. As his longtime colleague, alto saxophonist-composer Dave Binney, told Down Beat, “Chris is open to anything now. From here on anything could happen.” 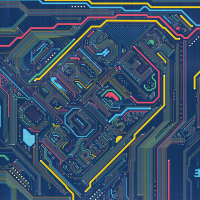 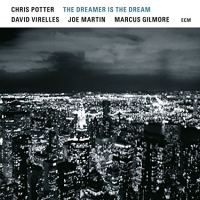 The Dreamer Is the...

From: Breakthrough
By Chris Potter

All About Jazz musician pages are maintained by musicians, publicists and trusted members like you. Interested? Tell us why you would like to improve the Chris Potter musician page.