I first remember getting excited about the trumpet when my father took me to see Herb Alpert and the Tijuana Brass in 1966. I was eight years old. As a teenager I saw a TV program about Charlie Parker and heard Herbie Hancock's recording of “Maiden Voyage” with Freddie Hubbard on trumpet. They really blew me away. I began practicing, taking private trumpet lessons and going to jam sessions. I discovered Miles Davis, Lee Morgan, Clifford Brown, Clark Terry, Enrico Rava, Woody Shaw and other great jazz trumpet players along the way. While earning a BFA in Music at City College of New York I also studied trumpet privately with Vincent Penzarella (New York Philharmonic). In college, I began playing latin gigs around New York and have since shared the stage with many of the greats in Salsa music, including Tony Vega, Lalo Rodriguez, Adalberto Santiago, Cano Estremera, Tito Gomez and countless others. I have toured the United States with the Broadway hit show “Chicago” and I have performed in fifteen countries on four continents with various jazz, pop, latin and R&B groups.

I appear on the 2009 release from Maña titled “Estamos Gozando” and am featured on the song “Intruso Amor” from Nayibe La Gitana ( 2012 ). 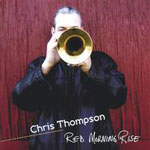 All About Jazz musician pages are maintained by musicians, publicists and trusted members like you. Interested? Tell us why you would like to improve the Chris Thompson musician page.