Chuck Anderson was born in Chicago, Ilinois on June 21st, 1947. At a young age, the family moved first to the Chicago suburb of Broadview then, to Westchester. When Chuck was 12, the Anderson family moved to Pennsylvania. He attended St. Katherine of Sienna grade school in Wayne, PA.

Basketball was a passion and looked like a possible career. Devon Prep was his high school of choice. Noted more for academic excellence than for sports, Chuck nevertheless continued his involvement in basketball. His discovery of guitar was completely accidental. Once, he played his first Em chord, music went forward and basketball went backward. Guitar lessons began in 1961. By 1963, Chuck was teaching guitar and playing local dances. Giving up basketball left his senior year completely focused on music.

Chuck entered St. Joseph's University in 1965. By 1967, it was apparent that music was to be his career. Both his teaching and performing continued to accelerate. By the time Chuck graduated in 1968, he was ready to teach and play full time.His first major break came in 1969 when he was offered the staff guitar job at the Latin Casino in Cherry Hill, New Jersey. The Latin was a famous showcase of world class entertainment. It was there that Chuck had his first associations with the top of the entertainment world. During that period, he accompanied and performed with legends such as Bobby Darin, Billy Eckstine and Peggy Lee among many others.

After four years of fourteen shows a week, it was time to turn in a new direction. Chuck started his concert jazz guitar career in 1973 when he formed the Chuck Anderson Trio with Al Stauffer on Bass and Ray Deeley on drums.Their first album, “Mirror within a Mirror”, received critical acclaim and was the springboard for a busy concert schedule. The Trio's music featured Chuck's original writing as well as uniquely arranged jazz classics. The group's forte was a tremendous interaction and internal dialogue. Improvisation was at the heart of every performance.

Another four years passed and he was offered the staff job at Valley Forge Music Fair in Devon, PA. Another major talent showcase, the Music Fair work helped Chuck solidify his reputation as an outstanding professional guitar player. Here, he worked with Nancy Wilson, Michel LeGrand and Anthony Newley among many others.

After seven years of intense show involvement, the creative need asserted itself again. This time, Chuck turned toward the development of The Neo Classical Guitar. In this style, Chuck pioneered the use of the pick style guitar in Classical music. Using both electric and acoustic guitars, his Neo Classical style featured transcriptions, original composition and improvisation on international themes. This work produced the ground breaking album “Kaleidophon - The Art of the Neo Classical Guitar”. Appearances and interviews on radio stations such as WFLN, WXPN and WRTI as well as television appearances on Prime Time and PBS heralded Chuck as the “new Segovia”. Two live recordings, “Timeless” and “Virtuosity”, were products of this period.

Ultimately, two events reshaped Chuck's career. The first was the theft of his Gibson L5 guitar. That instrument had played an important role in the development of Anderson's technique and unique style. It was the one that had carried him through his studies with Dennis Sandole, noted Philadelphia jazz teacher. Without his favorite guitar, Chuck found it difficult to perform. Though he tried other instruments, he was never able to recapture the magic of that first guitar.

Chuck turned to composition. He was totally absorbed in his writing for the next twenty odd years. This was ultimately to be a major factor in differentiating Anderson from other jazz guitarists.

One of America's greatest luthiers, Eric Schulte had taken care of Chuck's L5 since he first purchased it at the age of 19. He approached Chuck and asked why he was no longer giving concerts? Of course, he already knew but he had something in mind. He said, “Look I'll make you a deal. I know your L5 better than anyone. If you'll agree to go back and give concerts, I'll recreate your guitar”. Chuck could hardly pass that up and agreed on the spot. Months passed and the new guitar emerged. With guitar in hand, Chuck began to prepare for his return to the concert world.

After a while, it became apparent that his former energy wasn't there. He thought that it was age or lethargy or ... something.

Without realizing it, Chuck had been suffering for a long time with a severe condition of Obstructive Sleep Apnea. He was literally walking and working asleep. This particular problem was robbing him not only of energy but also of oxygen. The sleep therapy began and the energy and enthusiasm of his early jazz days returned!

With his customized Gibson L5 guitar and armed with this reborn energy, Chuck is now reclaiming his position as one of the outstanding jazz guitarists in the world today!

Chuck currently writes for the national magazine Just Jazz Guitar and has joined the staff of Jazz Masters on Mike's Master Classes. He maintains a busy schedule performing, teaching, composing and lecturing in the US and abroad.

Musicians and the Public Image

The Chuck Anderson Trio in Concert at Chaplin's Music Cafe

Announcing the Winners of the "Chuck Anderson - Freefall" Giveaway

“Guitarist/composer Chuck Anderson has the ability to turn notes into poetry.”

“Chuck Anderson is certainly one of America's finest and most influential guitarists...”

“The worst thing you can do is to imagine the uniqueness of Chuck Anderson's music. The best thing is to go see him...”

“Chuck Anderson is a force to be reckoned with. He is an outstanding teacher, a prolific composer and a great guitarist.”

“Chuck Anderson shows an amazing range of virtuosity and creativity

“Guitarist/composer Chuck Anderson has the ability to turn notes into poetry.”

“Chuck Anderson is certainly one of America's finest and most influential guitarists...”

“The worst thing you can do is to imagine the uniqueness of Chuck Anderson's music. The best thing is to go see him...”

“Chuck Anderson is a force to be reckoned with. He is an outstanding teacher, a prolific composer and a great guitarist.”

“Chuck Anderson shows an amazing range of virtuosity and creativity. Hats off to a true guitar master.”

“Chuck Anderson is so much more than a guitar virtuoso. He is an artist who instantly establishes a personal connection with his audience, a connection that is rekindled every time Chuck performs.”

“Chuck is a premier musician and teacher who enjoys an international reputation for excellence in teaching. He is the author of several publications and is a well known performer with a great deal of experience in virtually all forms of music.”

“Chuck is the teacher and keeper of the knowledge and master of the techniques. Keep passing it on! ”

“Besides being an outstanding musician, Chuck Anderson has developed a worldwide reputation as an innovative music educator. Noted as an author and researcher, he has developed methods and teaching materials which have helped musicians to develop their creative potential.”

“Chuck has an almost singular ability amongst contemporary music educators to balance the relevant academic knowledge with his broad based background as a performer and composer. No one has ever received the student accolades that he received from his lectures here in Liverpool.”

“Chuck Anderson has been a major influence on private music education for over 35 years. Teachers, players, arrangers and songwriters have all benefited from his unique combination of music knowledge, practical street experience and dedication.”

A wide variety of topics from Guitar Technique, Making a Living as a Guitarist, Jazz Guitar, Improvisation, Songwriting, Composition and more... 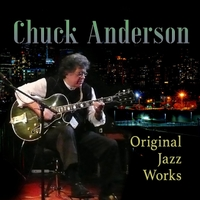 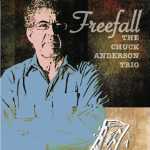 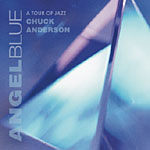 From: Freefall
By Chuck Anderson

From: Angel Blue: A Tour of Jazz
By Chuck Anderson

All About Jazz musician pages are maintained by musicians, publicists and trusted members like you. Interested? Tell us why you would like to improve the Chuck Anderson musician page.