It might seem strange to describe a singer as hip as Clairdee as a throwback, but she’s an artist who embodies creative values that have largely gone out of style. With her lustrous voice and soulful delivery, she hearkens back to a time when jazz, pop, and rhythm and blues often blended seamlessly together. Combining scene-stealing charisma with heartfelt humility and a sincere belief in the transformative power of music, Clairdee has honed a repertoire of standards set to state of the art arrangements that are equally smart and entertaining.

“I am a jazz inspired storyteller,” Clairdee says. “I choose songs that have some relevance to my life experiences and to human vulnerabilities. I want the music I sing to stir emotions, to make a connection, to be accessible.”

It was her finely honed jazz sensibility and old-school attitude about the importance of communicating with audiences that attracted legendary manager John Levy to the San Francisco-based singer. For Levy, who has worked with many of jazz’s greatest artists, Clairdee’s gift for putting her own stamp on a song while capturing its essence has broad appeal.

“I remember when you could clearly understand all the lyrics and every song was a story,” says Levy, who has always had an ear for jazz originals. At 93, he’s worked with many of the music’s greatest artists, including some of Clairdee’s biggest influences, such as Shirley Horn, Joe Williams and Nancy Wilson, who has found in Clairdee a kindred spirit

. “In the tradition of all great vocalists,” Wilson says, “Clairdee infuses each song with her own unique style while always remaining true to the song itself.”

Clairdee's stylistically encompassing approach is beautifully documented on her latest CD, Music Moves which is distributed by Hyena and was recorded live at Yoshi’s. The album captures her soul-infused sound with a version of “Summertime” inspired by her love of Donny Hathaway and Al Green. Her knack for pairing songs that enhance each other is perfectly embodied in a mashup of the Joe Williams/Count Basie hit, “All Right, Okay, You Win,” with the lean instrumental funk of Les McCann and Eddie Harris’s, “Cold Duck Time.” It’s a fascinating counterpoint to her previous release, Destination Moon a luminous collection of beloved standards, such as “Star Eyes,””I've Got the World On A String” and “Time After Time,” which she delivers with casual intimacy, turning each piece into an incisive emotional journey.

You can learn a lot about Clairdee by eavesdropping on the master classes she offers for singers studying the craft. “Please, don't just flip through a Fake Book and pick a tune,” she says. “Pick a song that means something to you. Do you really understand the lyric? Who wrote the song, and what does the original melody sound like? The more personal meaning it has for you, the more insight you can bring to your own interpretation of it. Put your life into the music.”

Born in Tucson and raised in Denver, Clairdee grew up harmonizing and dancing with her sisters and brothers in a show-biz minded family. She took to improvising naturally and formed a four-part vocal group in high school, but didn't start focusing on jazz until after college. She was already listening closely to pioneering jazz vocalists such as Carmen McRae, Sarah Vaughan and Betty Carter when veteran Hammond B3 organist William “Big Daddy” Sailes took her under his wing and taught her a repertoire of standards and how to develop arrangements to suit her voice.

Since moving to the Bay Area in 1986, Clairdee has performed almost every style of music, from R&B and cabaret to country and soul. But by the mid-90s she decided to dedicate herself to jazz, honing a singular sound while working with jazz luminaries such as trumpeter Eddie Henderson, alto saxophonist John Handy and pianists Roland Hanna and Allen Farnham. “From an arranging standpoint,” Clairdee says, “the jazz idiom provides an amazing canvas on which I can fully express myself to tell a story.”

Part of what makes Clairdee so distinctive is that she's also closely studied male masters like Johnny Hartman, Joe Williams, Billy Eckstine and Nat “King” Cole. Though she draws on those influences, Clairdee stresses that she is not interested in impersonating or imitating other artists. “Listening to a lot of different vocalists and instrumentalists in various styles of music has helped me hone my craft. But learning about who I am outside the music has been just as important, and has helped me find my voice within the music.”

Clairdee relishes the opportunity to work with John Levy, a manager whose historic career received a capstone this year when he was presented with a coveted NEA Jazz Masters award. “I feel like Cinderella,” she says, but for Clairdee, the party is just getting started. Show less 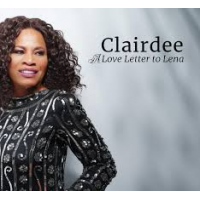 A Love Letter To Lena 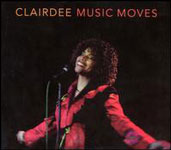 All About Jazz musician pages are maintained by musicians, publicists and trusted members like you. Interested? Tell us why you would like to improve the Clairdee musician page.