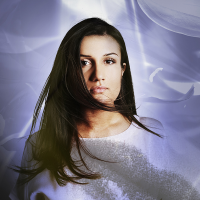 Premium Page
"For a Debut Album featuring nine self compositions and a stirring rendition of Charlie Chaplin’s poignant evergreen classic ‘Smile’ it’s a ‘Tour De Force‘ and how Claudia will up her game from this point forward will be exciting to further discover!"
—Nigel J., Jazz In Europe

I was born in 1987 in Budapest, Hungary, to parents who are both professional musicians. I sang before I could talk, and started playing the piano when I was 4. The whole family moved to Sweden, and by the age of 12 I could be seen “guesting” on my parents’ gigs in venues all around the country.

After discovering my dad's fusion albums with Chick Corea, John Patitucci, Mezzoforte, and others, I more or less stopped listening to vocalists. One night before I went to sleep, I listened to Herbie Hancock and Wayne Shorter, and woke up abruptly a few hours later with a song in my head. I quickly had to play it and write it down. Rainbow Dreams was born. I was 12, and I remember my dad came in to my room and said: “Girl, it's three in the morning. Stop playing or you'll be late for school tomorrow. Again”.

After graduating from the University of Music in Malmoe, I – then appearing as Claudia Dancs – rapidly established myself as one of the leading singers of my generation.

In 2009, I had the honor of singing backing vocals with a gospel choir at one of Stevie Wonder's shows. Working with Stevie inspired me a lot, and when I arrived back home early in the morning, after having had conversations with him about God and music, I sat down by the piano, and the song All Through You just burst out of my head, all at once.

After several years of working in Sweden and around Europe, I settled in Copenhagen, Denmark, where I met the Swedish-Italian drummer, Niclas Campagnol. I love to be in the spotlight, but this one man, who treated me like a queen for several years, couldn't bear me ignoring his feelings and stopped calling me. That's when I realized how much I loved him. I recorded Do You Love Me and sent it to him, and after that, Niclas and I were inseparable.

After taking time out following the birth of our son, I'm back on stage, and in 2017, I reached the final in Danish “Young Jazz” competition. I also guest starred on Antonio Faraò’s latest album ‘Eklektik’ (with Marcus Miller), on two tracks.

All About Jazz musician pages are maintained by musicians, publicists and trusted members like you. Interested? Tell us why you would like to improve the Claudia Campagnol musician page.