Clifton Anderson was born on October 5, 1957 in Harlem, New York City. He grew up surrounded by music. His father was a church organist /choir director, and his mother a singer and pianist. It was no surprise that Clifton exhibited an affinity for music at an early age. When he was just seven years old he got his first trombone, a gift from his uncle Sonny Rollins.

Clifton attended the prestigious Fiorello LaGuardia High School of Music and Art. In 1974 he spent one year at The State University of New York at Stony Brook studying under Simon Karasick and Dave Schechter. He continued his education at the Manhattan School of Music, and graduated in 1978 with a Bachelor of Music degree. At The Manhattan School, he studied under the renowned Metropolitan Opera trombonist John Clark. There he also met and befriended talented musicians like Angela Bofill and the late Kenny Kirkland.

While at Manhattan School of Music, Clifton began freelancing around New York City and made his first record date with Carlos Garnett in 1976. By his senior year at Manhattan he had established himself as one of the young “in demand” trombonists in New York. It was around that time that Slide Hampton formed the original “World of Trombones”, the group that would become the standard by which all jazz trombone choirs were measured. The group included Janice Robinson, Steve Turre, Earl McIntyre, Clifford Adams, Doug Purviance, Papo Vazquez, and Clifton along with residencies from Curtis Fuller, Britt Woodman and Benny Powell. Later additions to the prestigious trombone choir included Robin Eubanks, Clarence Banks, Frank Lacy, Conrad Herwig, Bob Trowers Garfield Fobbs and Malion Walker . Clifton has worked with a “who’s who” of diverse musical giants: from Frank Foster, McCoy Tyner, Clifford Jordan, Stevie Wonder, Dizzy Gillespie, Merv Griffin and The Mighty Sparrow to Lester Bowie, Dee Dee Bridgewater, Paul Simon, Terumasa Hino, Keith Richards, Muhal Richard Abrams, WyClef Jean, Geri Allen, T.S. Monk, Charlie Haden, Slide Hampton and Wallace Roney among others.

Clifton got the call to join his uncles group in 1983. He worked with Sonny Rollins touring worldwide and appeared on ten of Sonny’s recordings through 2009. Clifton worked on the Grammy Nominated “Without A Song /911 Concert” CD and produced four releases for Sonny’s Doxy Records label: “Sonny, Please”, the DVD “Sonny Rollins in Vienne”, “Road Shows Vol. 1”, and Clifton’s own “Decade”.

In 1997 Clifton released his first recording as a leader/producer on the Milestone label entitled Landmarks. Landmarks received critical acclaim internationally and made the top ten play lists on US Jazz radio. At the end of 2007 Clifton went back into the studio as a leader to produce Decade, his first recording in approximately ten years. The stellar reviews of Decade and Clifton’s live performances led to a nomination for 2009 “Trombonist Of The Year” from The American Jazz Journalists Association.

At the end of 2009 Clifton left Sonny’s band to actively lead his own group full time. Clifton headed back into the studio in September 2011 to record and produce his third release as a leader, and so we carry on, with a stellar lineup of guest artists who also happen to be his friends. The featured friends — pianist Monty Alexander, soprano saxophonist Kenny Garrett, bassist Bob Cranshaw, trumpeter Wallace Roney, percussionists Kimati Dinizulu and Victor See Yuen, and drummers Steve Jordan and Jeff “Tain” Watts – blended seamlessly with Clifton’s working band, tenor saxophonist Eric Wyatt, pianist Donald Vega, bassist Essiet Essiet and drummer Steve Williams, to create a musical blueprint for hope, renewal and carrying on. “With people increasingly faced with turmoil, uncertainty and crisis, I wanted to create music that uplifts the listener and offers a sense of hope to prevail” - Clifton Anderson

“and so we carry on” was released September 25th 2012 on Daywood Drive Records with worldwide distribution by BFM Digital. The highly anticipated recording immediately created a buzz among musicians. Embraced by critics, the public and radio, “and so we carry on” reached #4 on national jazz radio in the US and remained in the top 20 for several months. It was picked as “One of the top CD releases of 2012” by Jazz Inside Magazine. Clifton is now working with his stellar quintet in support of the recording.

Trombonist Clifton Anderson Appears with His Quintet at Dizzy's Club...

Trombonist Clifton Anderson New CD "Decade" Due in January on...

”In Clifton's hands, you hear the trombone in a modern guise. Clifton plays with plenty of hard-bop power, but he also delivers the punch with high-register sensitivity, exhibits enormous tenderness, and his cinematic sense of suspense holds the ear. What I love most about Clifton's playing here is his tone.” -Marc Myers - JazzWax.com 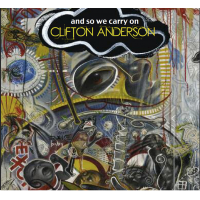 And So We Carry On 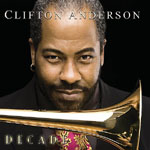 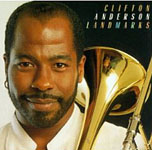 All About Jazz musician pages are maintained by musicians, publicists and trusted members like you. Interested? Tell us why you would like to improve the Clifton Anderson musician page.