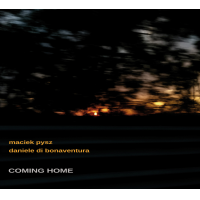 «Coming home» is the fourth album as a leader by the Polish musician Maciek Pysz, born in 1982, which follows «Insight» (2013), recorded in trio with Yuri Goloubev and Asaf Sirkis, «A journey» (2015), where the trio becomes quartet thanks to the engagement of Daniele di Bonaventura, and «London stories», carried out in duo with the Italian guitarist Gianluca Corona. Pysz favors acoustic guitars, with which he has developed an extremely personal, lyrical and smooth style that allows him to deal even with the most difficult passages with great fluidity and naturalness. He was barely twenty years old when he moved to London, where he soon got noticed thanks to his rare ease in merging instrumental virtuosity and melodic fantasy, and as of now the guitarist has already performed in many important venues. A sensible and sophisticated musician and a distinguished composer, he then had the chance to meet again Daniele di Bonaventura, forming with him a duo that, after a series of concerts in Italy and Poland, but especially after this successful recording made by Stefano Amerio, seems to have become a stable band. Di Bonaventura, among the most appreciated bandoneonists in Europe, especially thanks to the long collaboration with Paolo Fresu, which has helped increase his popularity, is also a wonderful composer and pianist – listen, in this regard, to Maciek Pysz’s More & more and Blue tango, but also to Daniele di Bonaventura’s Tango, together with its short improvised introduction – although in this role he is less appreciated than he deserves. A crepuscular album, as its title clearly suggests, «Coming home» is played with subtle nuances and intense, but barely whispered, melodies, able of dilate beyond every expectation. The guitarist succeeds in doing so, for example, thanks to the wise use of the electric guitar, in the song that gives the title to the album, and of which is an ideal closure. There are also some more relaxed and lively episodes – Nadir, Paquito and I gazzillori above all – but in the end it is always tango’s melancholy to dominate most of the work. It is in short a “homecoming”, which combines the joy of regaining the dearest ones with the nostalgia of what’s just been left behind.

All About Jazz musician pages are maintained by musicians, publicists and trusted members like you. Interested? Tell us why you would like to improve the Coming Home musician page.