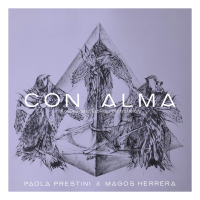 Composer Paola Prestini and vocalist/composer Magos Herrera present Con Alma, an operatic tableau on isolation that will be released as an album recording and live digital experience, featuring original works alongside classic songs from the Mexican and Jazz songbook. Created and recorded remotely during the COVID- 19 pandemic, the project explores the question of how we can find communion and shared experience in a time of isolation. The album was released on National Sawdust Tracks, the in-house label of National Sawdust.

All About Jazz musician pages are maintained by musicians, publicists and trusted members like you. Interested? Tell us why you would like to improve the Con Alma: Magos Herrera & Paola Prestini musician page.