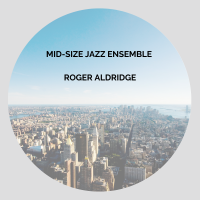 Shifting time funk! The title expresses my disdain for contending with monster SUVs when driving on Connecticut Avenue in Washington, DC. The soloists use four chord progression patterns. Each soloist determines which patterns to play and their sequence. The patterns can be played in any order. In addition, the soloist can play as few or as many patterns as he wants. Ideally, the patterns are determined within a performance instead of before. The soloist communicates the patterns, and when to shift to a new pattern, to the ensemble by hand signals. The ensemble (including horn players) can improvise backgrounds and interactions with the soloist. Music styles can also shift within a solo. Performers can take the music in any creative direction they want to go with it. NOTE: There are differences between the score and the demo recording. The small group recording was made by Jason Shapiro (from a lead sheet) several years before my mid-size ensemble score was written. For this new recording, David Arivett added the horn parts from my score to Jason's recording. The video syncs the pages of the score with the recording as closely as possible.

All About Jazz musician pages are maintained by musicians, publicists and trusted members like you. Interested? Tell us why you would like to improve the Connecticut Avenue SUVs musician page.