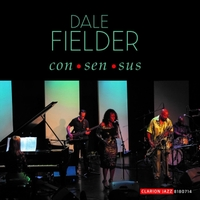 Saxophonist Dale Fielder and his 24-year-old quartet releases his 20th CD, “Consensus”. The band affectionately known as the DFQ has long been recognized as among the most consistently exciting jazz groups on the Los Angeles jazz scene, and the international jazz market through their recordings on Clarion Jazz. Along with exciting vocalist Rita Edmond, the CD combines tradition with the future of jazz. This is organic, hard-hitting original jazz that comes from having the freedom to play without restriction! With this new CD, the band seems well poised to take things to the next level. For over 22 years, jazz writers have been touting the uniqueness of the quartet. Back on their 10th anniversary in 2005, writer Roman St. James writing in the Jazz Review, said the following in reviewing the Quartet’s “Baritone Sunride” “The benefit of their long time alliance is obvious. telepathic-like interaction they maintain is one of the factors that allows this group to rise a notch above in a field that abounds in great jazz groups. If you are a fan of the baritone sax, you will absolutely love this album. Fielder’s chops are unequaled. I honestly don’t believe there’s a better proponent of the instrument alive and playing today. If you’ve never been a bari fan, the explosive creativity and enormous passion displayed on this recording may very well change your mind.” The group features 2 main soloists in baritone saxophonist and leader Dale Fielder and pianist Jane Getz. Getz is regarded as one of jazz’s living legends. She left a dream career in NYC working with all of the most prominent jazz artists of her time: Charles Mingus, Stan Getz, Grant Green, Charles Lloyd, Rahsaan Roland Kirk, Elvin Jones, Herbie Mann, and even turned the head and piqued the interest of the legendary Miles Davis; She left New York to move to Los Angeles as a top producer producing sessions with Ringo Starr, John Lemmon, The Bee Gees among many others. She continues as a producer and owns one of Hollywood’s busiest recording studios. Dale Fielder is one of the anomalies in jazz. Inspired by Thelonius Monk, Fielder has always maintained his preference for leading his own bands and playing his own music. As a result, he has become acknowledged as both an important baritone saxophonist and composer. Known earlier in his career as an alto and tenor saxophonist, in 2003 Fielder changed up and began playing baritone sax almost exclusively. Fielder feels his most natural voice and individuality comes through on the baritone sax than the other saxophones which he still plays when called as a sideman. The DFQ is rounded out by bassist Bill Markus and drummer Thomas White. Markus and White have quickly become LA jazz legends in their own right working with a who’s who of major jazz talent in LA. As an added bonus performing with the DFQ at Hotel Normandie is vocalist Rita Edmond, a leader and top artist as well. Writer Christopher Loudon in JazzTimes Magazine said the following about Ms. Edmond: “It’s not often that a vocal album suggests the near-certitude of future greatness, but Rita Edmond is of that rare ilk. Backed by a four-octave range, Rita recalls two of the all-time greats: reflecting the vocal power and majesty of Sarah Vaughan, the impeccable timing and phrasing of Carmen McRae, and the intense, natural musicality of both.” This new CD, continues to chronicle the DFQ doing what they do best; -playing live; no tricks, no gimmicks nor a safety net! Music created on the spot, in the moment; -what the art of creating the genuine jazz experience should be all about

All About Jazz musician pages are maintained by musicians, publicists and trusted members like you. Interested? Tell us why you would like to improve the Consensus musician page.