Bill Basie studied music with his mother as a child and played piano in early childhood. He picked up the basics of early ragtime from some of the great Harlem pianists and studied organ informally with Fats Waller. He made his professional debut as an accompanist for vaudeville acts and replaced Waller in an act called Katie Crippen and her Kids. He also worked with June Clark and Sonny Greer who was later to become Duke Ellington’s drummer.

It was while traveling with the Gonzel White vaudeville show that Basie became stranded in Kansas City when the outfit suddenly broke up. He played at a silent movie house for a while and then became a member of the Walter Page Blue Devils in 1928 and ’29. Included in the ranks of the Blue Devils was a blues shouter who was later to play a key role as early male vocalist with Basie’s own big band, Jimmy Rushing. It was in fact the rotund Rushing who happened to hear Basie playing in Kansas City and invited him to attend a Blue Devil's performance. Basie soon joined the band after sitting in with them that night.

After Page's Blue Devils broke up Count Basie and some of the other band members integrated into the Bennie Moten band. He remained with Moten until his death in 1935. After Moten’s death the band continued under the leadership of Bennie’s brother Buster, but Basie started a group of his own and soon found a steady gig at the Reno Club in Kansas City employing some of the best personnel from the Moten band himself.

The band gradually built up in quantity and quality of personnel and was broadcast live regularly from the club by a small Kansas City radio station. It was during one of these broadcasts that the group was heard by John Hammond, a wealthy jazz aficionado, who had himself worked as an announcer, disc jockey and producer of a live jazz show on radio. Hammond decided that the band must go to New York. Through his efforts and support (at times even financially) the band enlarged its membership further and went to New York in 1936. Hammond installed Willard Alexander as the band’s manager and in January of 1937 the Count Basie band made its first recording with the Decca record label.

By the following year the Basie big band had become internationally famous, anchored by the leader’s simple and sparse piano style and the rhythm section of Freddie Greene guitar, Walter Page bass, and Jo Jones drums. The great soloists of this band included Jimmy Rushing as vocalist, Lester Young and Herschel Evans tenor saxes, Earl Warren on alto, Buck Clayton and Harry “Sweets” Edison on trumpets, and Benny Morton and Dickie Wells on trombones, among others. Also contributing to the bands success were the arrangements by Eddie Durham and others in the band and the “head” arrangements spontaneously developed by the group.

Despite the occasional losses of key soloists, throughout the 1940’s Basie maintained a big band that possessed an infectious rhythmic beat, an enthusiastic team spirit, and a long list of inspired and talented jazz soloists. Among the long line of budding stars to pass through the Basie aggregation's ranks during these years were tenor men, Lester Young, Herschel Evans, Don Byas, Buddy Tate, Lucky Thompson, Illinois Jacquet, and Paul Gonsalves. On trumpets the list includes Buck Clayton, Harry “Sweets” Edison, Joe Newman, and Emmett Berry. In the trombone section Dickie Wells, Benny Morton, Vic Dickenson, and J.J. Johnson all had stints with Basie in the 40’s.

Except for a period in 1950 and ’51, when economic conditions forced him to tour with a septet, Basie maintained a highly swinging big band that, at one time or another, included Clark Terry, Wardell Gray, Al Grey, Frank Wess, Frank Foster, Thad Jones, Sonny Payne, Joe Wilder, Benny Powell, and Henry Coker. In 1954 Joe Williams became the band's full time male vocalist. By 1955 he had infused the Basie band with new life and further commercial success beginning with Every Day I Have The Blues. Also during this period arrangers Neal Hefti and Ernie Wilkins contributed many fine swinging arrangements to the band's book. These great men of music coupled with Basie’s undying allegiance to the beat and the 12 bar blues allowed the band to consistently turn out records of extremely high caliber well into even the 1970’s.

Count Basie's health began deteriorating in 1976 when he suffered a heart attack that put him out of commission for several months. Following another stay in the hospital in 1981 he began appearing on stage driving an electric wheel chair. Count Basie died of cancer at 79. 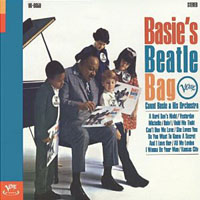 All About Jazz musician pages are maintained by musicians, publicists and trusted members like you. Interested? Tell us why you would like to improve the Count Basie musician page.