Sausalito Summer, the CD released in August, 2008 by Sausalito jazz composer and cornetist Court Mast is, as one might suppose, a musical love letter to that colorful, cozy, delightful town snuggled onto the shore of San Francisco Bay just north of the Golden Gate Bridge. And like the town itself, Sausalito Summer is in turns soothing, funky and festive, with a steady stream of sea breeze to clear the mind. The recording is a lyrical, spirited delight, built for comfort but laced, as well, with stirring moments and happy musical surprises.

The captivating joie de vivre and musical excellence of Sausalito Summer was highlighted immediately by the critical response to the CD. Jazz radio reacted quickly and approvingly, as Sausalito Summer, a mere two months after its release, was being featured on over 120 radio stations and online jazz sources across the U.S. Since then, the recording has held its own, and its spot on those play lists, quite nicely.

Reviewers have been equally enthused. Paul Liberatore of the Marin Independent Journal said, “The CD sparkles with waterfront-inspired tracks.” And Rotcod Zzaj of IMPROVIJAZZATION Nation wrote, “If you're looking for an album that allows you to kick back and groove, Court's magic cornet/trumpet will do it all for you, no doubt.”

This musical salute to Sausalito represents an entirely appropriate return to the jazz spotlight for Mast, who, after all, helps maintain one of the town’s most endearing traditions: he lives on a houseboat in Sausalito Harbor. The recording consists entirely of Mast’s original compositions, and you can feel the wind off the water and the sun on your face as you listen to his music.

Listen to tracks like the lovely ballad, “Marling Song,” with its three-way conversation between Mast’s clarion cornet work, Tim Wallace’s flute airs and Sam Grobe-Heintz’s delightful piano work, all caressed by a string trio. It adds up to the telling of a light, exquisite story. Or “Bridgeway,” a capering stroll, evocative of the scenic Sausalito promenade from which it gets its name and highlighted by Scott Petersen’s playful sax solo. Or the exotic “Water Street,” with its late night mysteries and churning street-life backbeat, pushed by Grobe-Heintz’s rippling piano.

With Sausalito Summer, Mast is stepping up after several years away from the mainstream to enter a fresh new voice into the jazz-pop spectrum. Active and successful on the San Francisco Bay Area jazz and rock scenes throughout the 1970s and into the early 80s, Mast stepped away from the music world in 1983. He is now delving back into his music and has turned out a CD with a deep and textured sound, driven by melody and a jazz sensibility tempered by his love of rich arrangements and an ear for contemporary styles.

An inspiration for stylish, accessible arrangements

Mast says the major touchstones for his new project are Henry Mancini and Chuck Mangione. Mancini is important for his lush arrangements that are musically sophisticated yet melodically rewarding. Mast favors Mangione for his élan and musicality and as an inspiration that breakout instrumental hits are indeed possible.

But Mast’s full range of musical influences is wide and eclectic. As a composer and arranger, Mast says he’s influenced by Claude Debussy, Duke Ellington, the Beatles and Steely Dan. The connection? “These are all composers who are melody based, but with some juice!” Mast says. As a cornetist, he lists Clifford Brown, Thad Jones and Ella Fitzgerald as inspirations, being drawn, he says, to “melodic style and interpretation rather than strict virtuosity.”

Mast is merging the new with the old on Sausalito Summer, reworking compositions he wrote a decade ago and honing pieces he’s written within the past year. Running through the compositions are the feel of the ocean breezes, the fragrances and the power that one feels standing on the shores of Sausalito.

“Sonically, these songs are relatively light on percussion,” Mast explains, “which allows more room for the pitched instruments. The result is a thickness more akin to R&B bands, a sound that’s ten miles wide. I wanted something very melodic but with some punch to it.”

Of the water theme, Mast says, “Living on and around the water is essential to my life. I’ve been a white water rafting guide, a bodyboard surfer, and always an avid beach walker. I live in a houseboat. The power and rhythm of water has always been a catalyst for me.”

An early training in big band, jazz and rock

Court Mast grew up in Sunnyvale, California, and took up the trumpet in grade school. He went to Fremont High School and upon graduation in 1969 travelled to Europe on tour with 120 high school and college musicians. Trumpet great Raphael Mendez was on board as guest artist, and Mast took six weeks of private lessons from the master. Returning to the Bay Area, Mast began performing in big bands around the South Bay and Peninsula and performed with the earliest version of the band that went on to fame as Tower of Power.

While taking performance and composition courses at De Anza College, Mast stayed active in a wide variety of bands, playing rock, jazz, Latin and Mexican music: anything that would keep a young working trumpeter onstage. In 1977, Mast moved to San Francisco, where, playing under the name Corky Miller, he led 4- and 5-piece jazz groups active on the North Beach music scene and in funky venues like the Hotel Utah.

In 1983, however, disillusioned with the direction that popular music, and jazz in particular, was moving in, Mast stepped away from the music world.

“I hit the wall,” he laughs, “and I did what every self-respecting musician should do when they hit the wall. I became a surfer.”

But while he was dedicating himself to surfing, Mast got turned on to the art form that would become his vocation for the next 20 years: photography. Over the past two decades plus, Court Mast became first a news photographer, then one of San Francisco’s leading commercial photographers. He’s still at it, through his business, Mast Photography.

But now Court Mast is again inspired to turn to his music, and to the creation of Sausalito Summer. “With these superb players and the incredible recording team at Skywalker Sound, we've produced a very intimate-sounding record with a core signature sound,” he says. “I’m excited about the work, and looking forward to sharing my music again.”

Read more articles
It was a pleasure listening to your CD. You are an excellent trumpet player, composer and arranger. I especially enjoyed the sequencing of the compositions. It really brought dynamics and flow to the CD. Obviously you've spent a lot of time perfecting your craft. I wish you all the best, and I'm looking forward to hearing your next project. Sincerely, Eddie Henderson -- Eddie Henderson, jazz trumpeter

It was a pleasure listening to your CD. You are an excellent trumpet player, composer and arranger. I especially enjoyed the sequencing of the compositions. It really brought dynamics and flow to the CD. Obviously you've spent a lot of time perfecting your craft. I wish you all the best, and I'm looking forward to hearing your next project. Sincerely, Eddie Henderson -- Eddie Henderson, jazz trumpeter

If you're looking for an album that allows you to kick back & groove, Court's magic cornet/trumpet will do it all for you, no doubt...I imagine one of the reasons I'm so excited by the often funky tuneage is because they are all Mast original compositions; as regular readers of this 'zine know, I believe pretty firmly that originals give the listener a much closer glimpse into the mind/soul of the players. -- Rotcod Zzaj, IMPROVIJAZZATION Nation #85 review

“Tam Junction” has a sultry swing that hooked me immediately. Tim Wallace lays out the theme on flute before the horns follow on top of a rhythm section that's definitely in the pocket. When Scott Petersen takes that bluesy solo, he's just getting you ready for the slinky bass break that reintroduces the flute... -- Mark Saleski, jazz.com

Mast's new CD is one of the most original I've been sent in a while...this is definitely an outside album, due to the freshness of the acoustic instruments. “West Wind” blows me back to Snoopy, while my favorite, the opening “Gold Coast” promises a cool, subtle sound...A recommended top-down-on-your-car experience. -- Ben Ohmart, SoopahMusic.blogspot.com

Sausalito Summer will be listed as the #1 Added CD on the next CMJ Jazz chart in issue 1071 of CMJ's New Music Report Magazine to be published in a couple of weeks. -- CMJ, College Music Journal

Sausalito Summer is the featured CD of the week on WUMR Memphis this week. -- Program Director, WUMR, Memphis TN

...The music on Sausalito Summer is sophisticated straight ahead containing light jazzy melodies sprinkled with boppish solos from a fine cast of players. -- Edward Blanco, eJazzNews

A cornet player that gave up on the music business 25 years ago comes back to let us know he never gave up on the music. With this jazzy date about his neighborhood, this set sort of proves that you should write about what you know about. Equally influenced by Henry Mancini and Chuck Mangione, the echoes of their work are here but so are the echoes of a slew of his favorite jazz artists...Sophisticated, adult listening that you don’t have to be a grown-up to enjoy. -- Chris Spector, Midwest Record 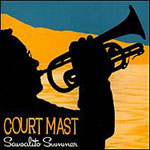 All About Jazz musician pages are maintained by musicians, publicists and trusted members like you. Interested? Tell us why you would like to improve the Court Mast musician page.