Cristina Pato has already opened historical new paths for the Gaita (Galician bagpipe). In 1998 Cristina Pato became the first female Gaita player releasing a solo album and since then she has collaborated with world music, jazz, classical and experimental artists (including Chicago Symphony, Yo-Yo Ma, The Chieftains, Arturo O’Farril, World Symphony Orchestra, Paquito D'Rivera). Her unique and powerful style full of passion and energy has been acclaimed by The New York Times as “a virtuosic burst of energy” or the BBC as “the Galician bagpipe diva”. Cristina Pato fuses the influences of Latin music, jazz, pop and contemporary music, and uses her artistry and unprecedented virtuosic skill to bring her musical vision to life. Pato is a member of Yo-Yo Ma’s Silk Road Ensemble.

An active recording artist and performer since age 12, Ms. Pato has released four solo Gaita recordings, two as a pianist and has collaborated in more than thirty recordings as a guest artist, including the Grammy award winner “Yo-Yo Ma and Friends; Songs of Joy and Peace” (SONY BMG 2008), the “Miles Español: New Skectches of Spain” album and the Grammy nominated Silk Road Ensemble album “Off the Map”(World Village 2010). Ms. Pato has given more than 500 concerts with her own band many of them recorded and broadcasted by television stations such as BBC, TVG, CNN and RTVE, and she has been praised by newspapers as The New York Times, El Pais, La Voz de Galicia or The Scotsman.

Ms. Pato is Doctor of Musical Arts in Collaborative Piano from the Mason Gross School of the Arts, Rutgers University (NJ, USA), where she studied with a fellowship from Fundacion Barrie de la Maza. She was awarded with the Edna Mason Scholarship and the Irene Alm Memorial Prize for excellence in scholarly research and performance (Rutgers University, May 2008). Cristina Pato holds both a Master of Music Degree in Piano Performance and a Master of Music Degree in Music Theory and Chamber Music (with honors) from the Conservatorio de Musica del Liceu (Barcelona). She also holds also a Master of Fine Arts Degree in Digital Arts (Computer Music) from the Universitat Pompeu Fabra (Barcelona). Cristina Pato is part of the Leadership Council of The SIlk Road Ensemble collaborating closely with Harvard University, the ensemble’s residency. Cristina is also a faculty member (adjunct) at the vocal department of New Jersey City University. Show less 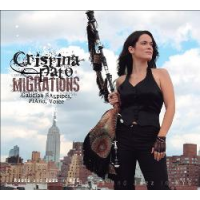 All About Jazz musician pages are maintained by musicians, publicists and trusted members like you. Interested? Tell us why you would like to improve the Cristina Pato musician page.