Native of the Andean region of Colombia, Daniel Criado has established himself as one of the best Jazz drummers in his country, in addition to having the reputation of being a drummer with impeccable technique and the ability to mix the different rhythms from Colombian folklore with the rhythms of traditional jazz. Daniel is also sponsored by one of the top cymbals companies, Bosphorus Cymbals.

His talent has taken him to important stages around the world such as the Luis A. Calvo Auditorium, Bucaramanga Modern Theater and Teatro Mayor in Colombia, Duc des Lombards in France, ASAKUSA Performing Art Center in Japan. The iconic Birland Jazz Club, The Performing Arts Center at Purchase, The Side Door, Fatcat, Smalls and Mezzrow in the United States among others. As it has led him to be part of prominent Colombian festivals such as the International Piano Festival UIS for three consecutive years, Jazz and Blues Festival of Santander, Jazz Festival UNAB; the popular Lady’s Got Chops in Peekskill, NY and The White Plains Jazz Festival, United States, not to mention that he has been invited to give workshops on his exceptional technique at the 2019 UIS International Percussion Festival.

Daniel has been deserving of outstanding prizes among which are the Artistic Scholarship for Excellence Colfuturo 2015 in Colombia and the third place in the Asakuza Jazz festival 2018 for best Jazz Ensemble, in Tokyo Japan. And also to the recognition given by the media for being invited to different programs on Colombian television channels such as City TV and Canal TRO and being interviewed as an Artist Guest at the famous Jazz radio program WBGO 88.3 and by Doug Krohn on WVOX 1460 am, United States.

Mr. Criado has done many recording sessions. Among the most important ones are the recording of “Cuando Vas a Irte” by the nationally renowned singer-songwriter and winner of the most prestigious Folk Festival of Colombian music “Mono Nuñez”, Maria Christina Plata. He has also recorded the drums for “Carry On (Unplugged)” by the Big Ska Band (soon to release), featuring the Daytime Emmy Winning producer Joe Ferry and the 1989 Grammy Winner for Best Hard Rock Performance, Corey Glover. Currently he is recording and producing a new album with one of his projects “Dannies from the South” that will be released this fall, followed by a promotional tour in the United States and Colombia by the end of this year. Show less 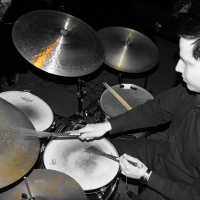 All About Jazz musician pages are maintained by musicians, publicists and trusted members like you. Interested? Tell us why you would like to improve the Daniel Criado musician page.