Daniel is a self-taught musician whose earliest musical performances were in church. At the age of 11 Daniel began singing in church and learning to play, eventually becoming proficient in the bass and guitar. In his late teens, Daniel began songwriting and continued to perform Christian music into the 80’s. Daniel’s deep-rooted Christian faith has grown with each passing year. Daniel believes that being a Christian isn’t about “religion”, but rather in having a personal relationship with God… striving to live daily life in a way that’s pleasing to Christ.

In the 70’s Daniel discovered Earl Klugh’s “Magic In Your Eyes” album and jazz became Daniel’s passion. In the 80’s, Daniels recording career began as he wrote and released a series of three Spanish Pop CDs, culminating with the release of “Lo Sabes” in 1996, which received the “Critic’s Choice” Award from Billboard Magazine.

2013 brings Daniel’s fifth jazz release, Infusion, on 7/1/2013. INFUSION is an eleven-track instrumental collection, “infused” with an eclectic mix of Jazz genres including Smooth, Contemporary, Latin and Jazz/Rock Fusion. All tracks are upbeat/moderate tempo with song personalities ranging from mainstream Smooth, to jazzier Contemporary, to heavily Latin-influenced Smooth, to high-energy Fusion. Each track not only stands on its own - uniquely original, intensely creative, with pleasing arrangements - together as a collection they weave a rich tapestry that is interesting and entertaining.

Over the years, Daniel has also written and produced a number of projects for other indie artists and collaborated with a number of well-known artists including Richard Kremode – Santana & MALO, Jock Bartley – Firefall, Dwight Beaumont – Flash Cadillac, Dave Innis - Restless Heart, including a video project with Louie Shelton. In 1998, Daniel produced a live album for gold recording artists, MALO, entitled MALO ROCKS THE ROCKIES, during Malo’s 25th anniversary tour. A book called VOICES OF LATIN ROCK written by Jim McCarthy with Ron Sansoe, chronicles the top Latin Rock bands of the 70’s, including a review of MALO ROCKS THE ROCKIES, considered to be MALO’s best live album to date.

Daniel is currently in the studio writing tracks for a talented new group, Jazzville Station that will debut on the Night Beat Jazz label in the fall 2013 timeframe. Show less 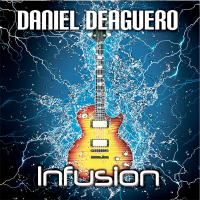 All About Jazz musician pages are maintained by musicians, publicists and trusted members like you. Interested? Tell us why you would like to improve the Daniel Deaguero musician page.