Composer and pianist Daniel Kelly has developed his own personal and unique approach to jazz, modern classical composition and free improvisation. As comfortable with keyboards, samplers and electronic sound manipulation as he is with acoustic piano, Daniel has innovated original ways to incorporate these instruments into his own sound world. This is evident on his highly acclaimed CDs, World and Duets with Ghosts. As a composer, he has innovated new ways of incorporating sound design and pre-recorded samples into works structured with sophisticated harmonic, melodic and rhythmic structures. He has composed for feature films, theater and various multimedia performances. As a performer, his ability to put a personalized stamp on many musical styles has lead to performances and/or recordings with artists as diverse as hip-hop/R&B star Lauryn Hill, master saxophonist Michael Brecker, Latin Jazz conga virtuoso Ray Barretto and avant-garde mainstays William Parker, Mark Dresser and John Zorn.

He is the pianist for Grammy-nominated drummer and bandleader, Bobby Sanabria and renowned spoken-word artist, David Gonzalez. Along with Gonzalez, Daniel was a repertory artist for the Lincoln Center Institute from 2002-2005. In the spring of 2006, he performed the music of classical composer Sergei Prokofiev in the production of the theatrical piece The Frog Bride, which was nominated for a Drama Desk Award and was performed at the New Victory Theater on Broadway, the Royal National Theater in London and is now touring throughout the US.

Daniel has been honored to be the featured composer at the NOW Music Festival. Held Capital University in Columbus, Ohio, this festival features new music by America’s leading composers. His work has also been used in theater productions in New York City and in Europe. Daniel has also been performing completely improvised solo piano concerts, the most recent of which will be released on CD in January 2007.

Daniel was chosen by the US State Department to be a Jazz Ambassador, performing a six-week tour to India, Thailand, Laos, Malaysia, Vietnam and Bangladesh. This highly prestigious honor is only awarded to a few groups each year that travel to developing countries to perform concerts and workshops.

Daniel's talents as film composer can be heard in the films The Receipt, Below the Belt (awarded Best Film of the Oregon Film Festival) and The Legend of Johnson Roebling.

Daniel’s compositions will be featured at the World Forum in Puerto Rico in December 2006, where he will perform and collaborate with former Nobel Peace Prize winners. Show less 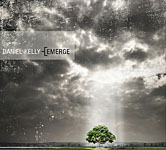 All About Jazz musician pages are maintained by musicians, publicists and trusted members like you. Interested? Tell us why you would like to improve the Daniel Kelly musician page.