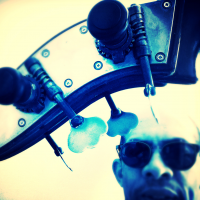 Darryl is an American jazz bassist who has lived in France since 2004. Previously, he lived in New York for twelve years where he participated with some of the world’s greatest artists. He performs many genres of jazz and participates in a variety of projects with artists from the U.S. and Europe, traveling around the globe. He was born in Philadelphia, Pennsylvania, birthplace to some of the world’s finest bassists including Stanley Clarke, Jaco Pastorius, Alphonso Johnson, Charles Fambrough, Percy Heath, Jymie Merritt, Christian Mcbride, Arthur Harper, Tyrone Brown, and Victor Bailey.

. He learned early in life to appreciate many types of music. But he holds the strongest allegiance performing music of the African American diaspora: jazz, gospel, soul, and Latin. He also has a great love and knowledge of the music of Brazil. His versatility, soulfulness, openminded-ness, and professionalism have made him very much appreciated. Show less

All About Jazz musician pages are maintained by musicians, publicists and trusted members like you. Interested? Tell us why you would like to improve the Darryl Hall musician page.