Born in Portsmouth, Virginia, Bailey studied drumming in New York City at the Music Center Conservatory following his stint in the Air Force in World War II. He played with Herbie Jones from 1951-53, and later with Johnny Hodges, Charles Mingus, Lou Donaldson, Curtis Fuller, Billy Taylor, Art Farmer, Ben Webster, and Horace Silver. Between 1954 and 1960 he played on several sessions led by Gerry Mulligan, and in the 1960s he also played with Clark Terry, Kenny Dorham, Lee Konitz, Cal Tjader, Roger Kellaway, and Bob Brookmeyer. In 1957 and 1958 he performed at the Newport Jazz Festival, also appearing in the documentary 'Jazz on a Summer's Day'. In 1969 he retired from music and became a flight instructor. From 1973 he worked in music education in New York; among other things, he was involved with The Jazzmobile. 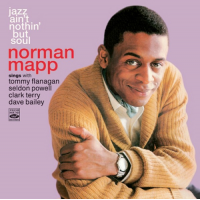 All About Jazz musician pages are maintained by musicians, publicists and trusted members like you. Interested? Tell us why you would like to improve the Dave Bailey musician page.