After serving as road manager, Dave Mason, singer/guitarist played in a band that opened for the Spencer Davis Group. The drummer of the was Jim Capaldi. After an American tour, Capaldi and Mason joined forces with Steve Winwood (from Spencer Davis) and Chris Wood (form Shades of Blue) who found fame as one of the founding members of the jazz/rock/pop fusion group Traffic.

However, conflicts between Winwood and Mason over the group's direction led to the latter's departure in 1969 after three albums. Mason moved to Los Angeles and joined Delaney & Bonnie & Friends. Opening for Blind Faith (which featured Winwood and Eric Clapton), Clapton joined Delaney and Bonnie. After a few months and Clapton's solo album, Eric and Mason stole the Delaney and Bonnie rhythm section, bassis Carl Radell, drummer Jim Gordon and piano player Bobby Whitlaock to form Derek and the Dominoes. Dave left shortly thereafter, and signed to Blue Thumb, beginning his solo career. His 1970 solo debut, Alone Together, with Jim Gordon featured on drums, went Gold and is, arguably, his best album . He followed up with a duet album with (Mama) Cass Elliot.

Mason's tenure with Traffic was disjointed. He co-founded the group, but left following the recording of their debut album, Mr. Fantasy (1967), only to rejoin halfway through the sessions for their next album, Traffic (1968), after which the band broke up. Last Exit (1969), a compilation of odds and ends, features little material by Mason apart from his song “Just For You.” Traffic would later reform without Mason, although he briefly toured with the band in 1971 as captured on Welcome to the Canteen.

Mason was a good friend of legendary guitarist Jimi Hendrix, whose career was launched in England in 1967. Hendrix first heard the song “All Along the Watchtower”, by Bob Dylan, at a party he was invited to by Mason, and promptly decided to record his own version. That night he recorded the song at Olympic Studios, South West London, with Mason playing acoustic guitar. It was released on the Electric Ladyland album in September 1968. When the song came out as a single in October, it hit #5 on the UK Singles Chart and was a Top 40 in the U.S. Mason later recorded his own version of the song on his self-titled 1974 album, Dave Mason.

Mason appears on the Rolling Stones' 1968 album Beggars Banquet, although uncredited. Mason's connection was Jimmy Miller. Miller served as producer for the Stones and Traffic. In 1969”1970, Mason toured with Delaney and Bonnie and Friends along with Eric Clapton and George Harrison. Mason appears on George Harrison's 1970 solo set All Things Must Pass. In 1970, Dave was slated to be the second guitarist for Derek and the Dominos, but left the group before they entered the studio.

Dave Mason pursued a moderately successful solo career. His first single Little Woman, with his song writing and sound cumulating on this 1970 album Alone Together. In the mid-late 1970s, he toured and recorded with guitarist Jim Kreuger, keyboardist Mike Finnigan, bassist Gerald Johnson and drummer Rick Jaeger. The 1976 album, Certified Live is a display of Mason's songwriting, arranging, vocal and guitar talents. In 1977, Mason had his biggest hit with We Just Disagree, written by Jim Krueger, reaching #12 on the Billboard Hot 100, later successfully covered by country singer Billy Dean. Mason's 1980 single, Save Me, was notable for featuring a duet with Michael Jackson. For a brief period in the 1990s, Mason joined Fleetwood Mac and released the album Time (1995).

In 2002, he released the DVD, Live At Sunrise, featuring a live performance at the Sunrise Theater in southeast Florida, backed by Bobby Scumaci on keyboards, Johnne Sambataro on rhythm guitar, Richard Campbell on bass and Greg Babcock on drums. In 2004 Dave Mason was inducted into the Rock n'Roll Hall of Fame.

Mason is a proponent of music education for children. In 2005, he signed on as an official supporter of Little Kids Rock, a non-profit organization that provides free musical instruments and lessons to children in public schools throughout the U.S. He sits on the organization's board of directors as an honorary member. Show less 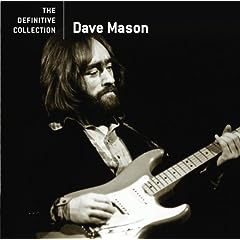 All About Jazz musician pages are maintained by musicians, publicists and trusted members like you. Interested? Tell us why you would like to improve the Dave Mason musician page.