Dave Pell started the octet after playing with most of the bands in the big band era, including Benny Goodman, Tommy Dorsey, Harry James and the like, he was a featured star of the Les Brown Band of Renown for 13 years. Shorty Rogers and Marty Paich were the first arrangers that came up with the unique sound of the band that was basically the four soloists from the Les Brown Band and the rhythm section.

The Dave Pell Octet was one of the bands credited with the creation of the West Coast Jazz scene in the 1950’s. The band became an instant success and was a showcase for the great new West Coast arrangers, including John Williams, Bill Holman, Bob Florence, Johnny Mandel, Andre Previn, Med Flory and many more. The Dave Pell Octet arrangements are once again being made available from Dave at his Jazz/Dance arrangements site because of the resurgence of interest from schools all over the world.

Best know as the leader of The Dave Pell Octet. Dave has recorded over thirty albums with his band. He also recorded 2 CD’s with his group Prez Conference in celebration of Lester Young featuring “Sweets” Edison and Joe Williams.

Dave's other credits encompass the full scope of the professional music industry from sideman to bandleader, music publisher, producer, jazz musician, label owner and music supervisor for many films 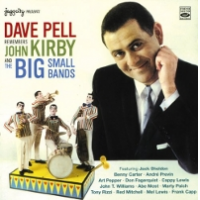 All About Jazz musician pages are maintained by musicians, publicists and trusted members like you. Interested? Tell us why you would like to improve the Dave Pell musician page.