Dave Pope is an Atlanta based multi-instrumentalist performing on drums, guitar and bass guitar. Dave grew up in a musical family with parents, Ann Almond Pope and David Pope Sr., both virtuoso classical pianists, and teachers. His brother Pete is a pianist who performs in the Austin TX area and his brother Mike has had an extensive career as a touring bassist, pianist, producer, composer and most recently as Associate Professor at the Berklee College of Music.

Dave began his music career in the Toledo OH area at the age of 14 playing in garage bands and subbing for college jazz musicians who were double booked for gigs. With the instruction and mentoring from local musicians such as drummer Bob Breithaupt, bassist Jeff Halsey, guitarist Chris Buzzelli, and multi-instrumentalist Gene Parker, Dave began performing with some of the best musicians in the region. Among those musicians were pianists, Larry Fuller, Mark Kieswetter and Ron Oswanski; guitarist Dan Faehnle and trumpeter Jimmy Cook, to name only a few. During his Toledo days, Dave had a brief stint in Chicago in the late 80’s where he studied with drummers Joel Spencer and Paul Wertico and performed with guitarist Akio Sasajima. After returning to Toledo, Dave embarked on several projects as a bandleader, some of which included his brother Mike and a group featuring trumpeter Randy Brecker.

The album, Dave Pope Trio “You and The Night and The Music” was recorded at brother Mike’s studio in 2010 and released in 2012. It features John Patitucci on bass, Mike Pope on piano and Dave on drums. The project was somewhat experimental in that Mike, primarily a bassist, played piano with his mentor and long-time friend, John Patitucci on bass. The end result was a wonderful documentary of spontaneity as the trio had only played together on the session with no rehearsals. Dave initially self-marketed the record up until signing with Blue Canoe Records in December of 2019. Show less 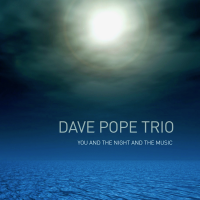 You And The Night And...

Blues In The Pulpit

Dave Pope
You And The Night And The Music

All About Jazz musician pages are maintained by musicians, publicists and trusted members like you. Interested? Tell us why you would like to improve the Dave Pope musician page.