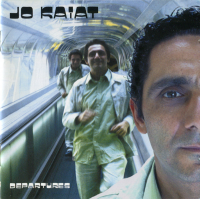 When one is born jazzman, one is open to the world of music. It is the century that ends and that says it to the ear of the one who tends it. In the beginning, jazz was born in black and white, illegitimate child of gospel and classical, mixed blues and country. And then, he invented a world, a universe beyond the questions of styles, a score that is envied towards infinity. To grow, to feed his appetite for music, his thirst for improvisation. he served himself wherever he was invited, he invited himself wherever he could be served. In the four corners of the five continents, he got drunk, filled up, he tasted too. Not to serve the same dishes. Tasty cocktails and new cuisine certainly, but so that the sauce rises to the nose, so that the brouet is successful, in the respect of traditions. For more than 80 years, it goes so, curious about the things of this world, their original colors. Since all this time, jazz, gourmet and gourmet, has not finished tasting the pleasures of refined blends, concocted in the old way, blown in the present moment. The nobility of jazz is its spirit. Jazz is a world of music in the plural, in the singular. He is out of necessity, that is his reason for living. He is out of pleasure, that is his way of playing. Jo Kaiat understood it well. It was by searching that he found himself. From Paris to Bamako, from New York to New Delhi, he made his music travel, away from the middle of the road, derive his piano from continent to continent, in search of an identity, in perfect accord with his way of seeing and living, here and now, in a time that combines above all with the present. He dug his groove, ever deeper. The pianist forged a character, a style. His music speaks Creole, his music, ours too for those who can listen. Of course! In 1999, world music is in every mouth and yet it often speaks only one language. In 1999, the merger still did not avoid confusion. We marry for the time of a record, we take some notes in passing, we dialogue a little, barely, from the tip of the lips. Others go further, take their time, step back for the lead. Jo Kaiat understood that. To embody his vision, to be in perfect harmony with his life, in harmony with the notes he chose, who chose him, he adopted the formula of the trio, adapted it according to its formulation. One is Indian, the other African, one and the other are similar, the two resemble the master of cenes. Jo Kaiat’s jazz also delves into the roots. Tablas and a violin in tune with Indian fashions, a doum- doum and a kamalen n'goni at the heart of Malian rhythms. All in all, a drum and strings to power two. The second goes through Morocco to visit the long blues of the descendants gnaoua, these other men blue night. Here and there, a certain idea of an uncertain jazz is never far away. The first revisits La lit, an ancient rag that symbolizes the separation of lovers, which is played when the night goes down. The second takes up Koredouga, a traditional song that invites to party, where everything and its opposite is possible. Jo Kaiat likes to play paradoxes. The rhythms are from the party to Delhi, the harmonies go into trance to Bamako. And Inversely. Everything is not simple. The pianist drew lines that deviate, stretch, stretch. shorten. Two isosceles triangles, two original versions of a jazz that has the duty to be, two square visions of a musician, which combines the most than perfect and previous future. yesterday and tomorrow. Animated by the batting spirit of Jo Kaiat the piano becomes drum. Agitated by the fertile thought, the piano comes melody. Left hand, right hand, it is both, in turn minimalist and expressionist, dark and colorful, powerful and light. There is a lot of virtuosity. There are even more ideas. What is the point of aligning notes in all directions if they are not guided by a voice, towards a crossroad. Listen. It has nothing to do with that. Listen, you won’t believe it.

All About Jazz musician pages are maintained by musicians, publicists and trusted members like you. Interested? Tell us why you would like to improve the Departures musician page.