Devyn Valerie Rush was born on January 25, 1990 in Philadelphia, PA. By the age of six months, Devyn was saying “Hi!” to people in the supermarket, and singing followed shortly after. It didn’t take long before the “Powers to be” noticed her talent and began booking her for commercials and print ads. She made her first commercial at the age of six months. Since then, Devyn’s résumé has filled up with a long list of accomplishments, which includes extensive theater credits. She has been making good use of her young life.

Devyn began to gain a reputation among agents and other “big wheels” in the industry, as being a very charismatic and naturally-talented child. She was constantly asked back and hired by companies several times because she had a knack for taking direction. At the age of four, Devyn made her theatrical debut as Gretl in the “SOUND OF MUSIC.” She followed that performance with roles in “OLIVER!”, “RUTHLESS!,” “I REMEMBER MAMA,” and “ANNIE,” in which she played the title role twice. Devyn also appeared in commercials and print ads constantly, booking almost every role she auditioned for in the Philadelphia area.

Soon, Devyn’s manager urged her parents to begin taking her into New York City for auditions. Unsure if Devyn would be able to compete and keep up with the fast-paced competition in the city, they tried it out. Devyn’s talent shined more brightly than ever, and she gained the same kind of success she had previously. Devyn soon began booking national television spots and voice-overs for Nickelodeon and Scholastic, and became very popular with several agents and directors.

Perhaps Devyn would note a few of her most recent endeavors, as her favorites. Her invitation to appear on PAX TV’s AMRICA'S MOST TALENTED KIDS,” was one of the most exciting for Devyn, as she was flown to Hollywood for the first time and sang for a live audience as well as millions of television viewers.

In the winter of 2005, Devyn packed up and moved to New York City to work in the workshop and development stages of Duncan Sheik and Steven Sater’s new musical, “SPRING AWAKENING.” She originated the role of ANNA and performed in a highly-praised staged reading in the Allen Room at the very prestigious Lincoln Center, amongst a cast and crew of show business legends such as Michael Cerveris (”Sweeney Todd”), Kate Burton (”Grey's Anatomy”), producer, Tom Hulce (”Amadeus”), and director, Michael Mayer (”You're a Good Man, Charlie Brown”).

That summer, Devyn returned to New York and to “SPRING AWAKENING”- this time for it's Off-Broadway run. In January of 2007, she played Tia in the musical version of SAVED! at Playwrights Horizon, with Anna Gasteyer (”Saturday Night Live”; “Mean Girls”).

Devyn will continue to pursue her dreams, which keep her constantly performing with the love and support of her family, and friends, who mean the world to her. Show less 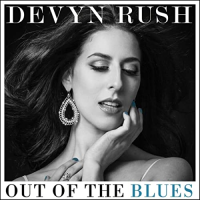 Out of the Blues

All About Jazz musician pages are maintained by musicians, publicists and trusted members like you. Interested? Tell us why you would like to improve the Devyn Rush musician page.