Monroe is a Pennsylvania Performing Arts on Tour roster artist. She performs her own solo, duo, trio, and quartet projects, and appears as a guest artist with classical & contemporary chamber ensembles, orchestras, and jazz ensembles throughout the United States. Her guest soloist credits include appearances at Carnegie Hall, Zurich Switzerland’s Tonhalle, Alice Tully Hall, the Apollo Theater, and the Kennedy Center. In addition, she is active as a composer, recording artist, and educator.

As a chamber artist, Monroe has performed with Arnold Steinhardt, Yo-Yo Ma, and Cecil Licad. She was a member of the Beaumont String Quartet, and co-founded both the Kasimir String and Amabile Piano Quartets. As a guest, she appears regularly with the Ritz Chamber Players, Lyrica Chamber Players, and the Oregon String Quartet. Monroe has attended the Marlboro, Caramoor, and Sitka chamber music festivals.

As an improviser, she has toured for over a decade as first violinist of the Max Roach Double Quartet and the Uptown String Quartet. She performed extensively as a member of the String Trio of New York, and has performed on stage with renowned jazz artists such as Max Roach, Percy Heath, John Blake, Dave Grusin, Joe Lovano, Reggie Workman, Wycliff Gordon, Uri Caine, Jim Ridl, and Tom Lawton.

Monroe is frequently called upon to premiere new works by composers such as David Baker, Andrew Rudin and Anthony Davis. Last season she premiered the new solo violin works of composers Andrew Rudin and Steven Sametz with Philadelphia’s Orchestra 2001, and the Lehigh University Orchestras. She has been featured in new music ensembles such as Bang on a Can All Stars and the Relache Contemporary Ensemble. Her own compositions have been commissioned by music and theater ensembles such as The Core Ensemble, Relache, and the Tapit/New Works Theater Company.

As a soloist she is a guest on more than a dozen CD releases, including most recently, “The Oregon String Quartet and All That Jazz” on Koch Records.

Her film credits include Wes Craven’s Music of the Heart, with Meryl Streep, and Small Wonders, an Allan Miller documentary. Her performances, compositions, and arrangements have been heard on National Public Radio, The Cosby Show and Mr. Rogers’ Neighborhood.

Monroe has received many distinguished awards including the Bristol-Meyers Squibb Residency Award, the Alan and Wendy Pesky Residency Award from Lafayette College in Easton, PA, and the Robert Trotter Chair Position at the University of Oregon at Eugene. Last year she received two Creative Connections/Composer grants in one season, and she has been awarded numerous Meet the Composer.

Diane Monroe studied at Oberlin Conservatory, and Philadelphia Musical Academy earning her Bachelor of Music in Violin Performance. She continued her studies at Michigan State University and was awarded a degree in Performance from The Curtis Institute of Music. Her violin teachers were Ivan Galamian, Charles Castleman, David Cerone, Joyce Robbins, and Walter Verdehr. Show less

Violinist Diane Monroe Interviewed at All About Jazz! 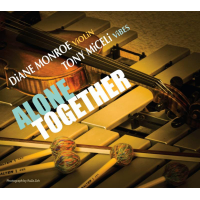 All About Jazz musician pages are maintained by musicians, publicists and trusted members like you. Interested? Tell us why you would like to improve the Diane Monroe musician page.