Pianist/Composer/Educator, Dino Losito. was born in Elmira, NY. He comes from a very musical family, and was exposed to music at a very early age. His mother, a vocalist, was one of his first influences, along with many other family members, Dino began formal lessons on piano at the age of 4. Along with piano, he also studied flute and percussion. Though classical music was the study at the time for him, jazz was always present in the home, and it was obvious this music would be his pursuit. By the time Dino was eighteen years old, he was already working professionally. Dino went on to further his studies at William Paterson University. He had the privilege of being under the tutelage of such notables as Norman Simmons, Harold Mabern, Rufus Reid and Pete Malinverni. Dino has performed at many notable venues throughout the country and abroad. Some credits include, Blue Note, Birdland, NBC Rainbow Room, and Dizzy’s at Lincoln Center (NYC). He has also performed/recorded with such notables as Eric Alexander, Dave Liebman, Houston Person, Joe Romano, Don Menza, Wallace Roney, Harry Allen, Mickey Roker, Joe Magnarelli, Grant Stewart, Danny D’Imperio, Nancy Kelly, and many others. His cd release ‘Like That‘, as a leader, has received critical acclaim, and Dino has been featured on over a dozen recordings as a sideman. Losito's ability to captivate audiences with his lyrical playing, sensitive melodies, and his infectious groove, has led him to be one of the most sought after pianists on the scene

. Along with performing and recording , Dino keeps an active teaching schedule, and is currently on the faculty at 171 Cedar Arts Center in Corning, NY. Show less 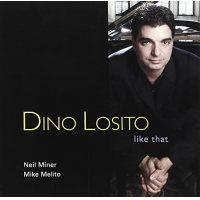 All About Jazz musician pages are maintained by musicians, publicists and trusted members like you. Interested? Tell us why you would like to improve the Dino Losito musician page.