In the midst of the 1980′s a bunch of young hippies gather together in a small container on an industrial site. at the south part of Rotterdam, Holland, generating an immense untuned cacaphonia of sound & chaos. From it emerged the hippie freak rock trio “Mistic dawn”, with Wally Dijksman a.k.a Day-T(’62) on guit and vocals, Moniek de Boer a.k.a Mo (’65) on bass, and Peter J. Faber (’62) on drums. Their first demo tape brings a small cult status. Early nineties,

Peter Faber leaves the trio. The name changes into Distract vibes and Ron Verbeek (’57) is added as new impuls. Powerhitter Ron’s impact on the musical structures leads to extreme hard-core & noise patterns. Their debut album ” the Fury” (lp,91) enforces a modest break-through in the European alternative circuit. It isn’t untill their second release “a Brand new nightmare” (cd,’93) before things really start to roll. The next year they spend touring Europe intensively.

Free-jazz tenor saxophone veteran Arthur Scova Rhigini is, after seeing them at a live show, tempted to boost the Vibes harmonics with his precence in 1994. Now a four piece, the music becomes a composition of free-jazz and noise with more room for improvisation. This development makes way for concerts out of the hard-core underground circuit and more into theatres, art-centers and jazzclubs.

In 1995 drummer Ron quits the project leaving the Vibes with a major decision to make, taking another drummer, or go on as a trio. After carefull thought they decided to go for option two and at the same time introduce electronics into the Vibes spectrum. Obscure complex sequencer rhythm-tracks overlayed with heavy noises, pulsating bass tracks and hysterical saxophone screams where packed on the cd “No more“. Recorded in the legendary jazzclub “the jazzbunker” in Rotterdam, spring 1995.

Due to the constant search of new ways to expres themselves, and the open mind to other forms of expression and art, Wally & Moniek found themselves in producing a music/theatre performance called “Symbiology” (’97,video). A raw audio/visual show about people in the outskirts of urban civilisation. It opens ways to bigger European theatres, ending up with an invitation for the prestigious “Kyk-art” jazz festival (1998) in St Petersburs, Russia.

Arthur Scova Rhigini trades places with percussionist/bandoneon player Mark Constandse (’57) in 1998. Constandse, higly influenced by eastern-european gypsy music, brings in 7th and 5th quarter measures and melodies. Combined with the free noise approach of the Vibes leads to an original & new kind of music. “Transparent passing” (cd,’98) comes out and is well recieved in the european “avant-garde” jazz circuit. It is followed by extensive touring once again.

In 1999 the Vibes move their home-base from Rotterdam to London, England. Mark Constandse stays in Holland and forms his own gypsy band “Parne gadje”. Living in a small artist community on the south bank they organise concerts, projects and art-exhibitions all over town involving illustrious acts and performers like John Edwards (a.o Evan Parker) “Brain of morbius“, “Baby trio”, Charles Hayward (This heat), “Bert shaft orchestra“, David Aylward (Blurt)

This goes on untill 2001. Wally & Moniek turn back to Rotterdam to work on a new piece called “Tranquileyes” (cd,’01) five duets for bass and guitar. A fragile instrumental miniature of five pieces of music undressed to the bone.

The experience of working as a duo and the subsequent freedom of expression, structure and composition works as an eye-opener and is followed by “Livingroom recordings (cd,’04), “a Depraved scent” (cd ’05), “is your mind free?!” (cd,’08), “live @ radio Funkwelle” (cd,’09), ending up with the latest release “Hot-nead in silent water” (cd,’11).

During this last 10 year period they play as a duo in a variety of clubs, bars, art-centers and theatres all over Europe occasionally engaging themselves in side-projects with interesting musicians, performers and film /video artists.

At this moment they’re working hard on promoting their latest release “Hot-nead in silent water“, released the 16th of december 2011, and started works for a new album wich is expected to be finished at the end of 2013. Show less

Timeless music, with vocals like a summit for prayer. Odd?, yes, beautiful?, yes again, beautiful all together. Melodic bass and guitar accompanied by vocal and subtle bells. Imagine the experimental compositions of ”Tool“, like the intro of ‘Parabola‘ in a smaller line up….. that’s Distract Vibes. ( Vpro radio, Lisa Ruskus). The online version (in dutch) here. Review of a concert at the ‘Noisy night in Paradox with Off on off and the Talibam at the Paradox, Tilburg by Lisa Ruskus.

Critics have called them:

Timeless music, with vocals like a summit for prayer. Odd?, yes, beautiful?, yes again, beautiful all together. Melodic bass and guitar accompanied by vocal and subtle bells. Imagine the experimental compositions of ”Tool“, like the intro of ‘Parabola‘ in a smaller line up….. that’s Distract Vibes. ( Vpro radio, Lisa Ruskus). The online version (in dutch) here. Review of a concert at the ‘Noisy night in Paradox with Off on off and the Talibam at the Paradox, Tilburg by Lisa Ruskus.

Painters using their instruments like brushes to paint imaginaty landscapes of the soul (the Wire).

A mosaic of of different pictures, every picture a healthy satiric comment on our daily life (university of Maribor). 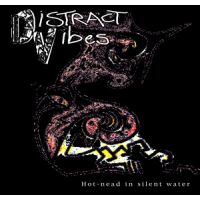 All About Jazz musician pages are maintained by musicians, publicists and trusted members like you. Interested? Tell us why you would like to improve the Distract Vibes musician page.