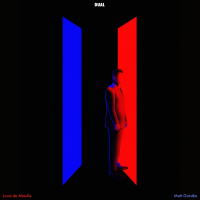 All drum grooves and concepts developed by Matt Garstka and recorded first. All melodies and harmonies added by Louis de Mieulle afterwards. Drums edited accordingly. From the 25 minutes of recorded drums, about an hour of music was created. DUAL is the first part of that collaboration. Second part to be released Summer '18. DUAL: Having a double character or nature A notion of paired concepts that mirror one another Within every independent entity lies a part of its opposite Contrast between Set (disorder) and Osiris (order) Mind and Body, Consciousness and Matter, Soul and Body Abstract musical ideas - and their realization. released December 8, 2017

All About Jazz musician pages are maintained by musicians, publicists and trusted members like you. Interested? Tell us why you would like to improve the Dual musician page.