Bio Duane Andrews’s music is the product of a great ear, an adventurous spirit and a love of music that is beyond category. Uniting what would seem to be impossible – traditional Newfoundland music with the Gypsy Jazz of the legendary Django Reinhardt, Andrews makes it not just work – he makes it soar. The award winning guitarist, composer, producer and international performer’s latest album, Raindrops, is the best evidence yet of his truly unique musical vision and is the sound of him, literally, bringing it all back home.

A native of the island of Newfoundland, off the east coast of Canada, Duane grew up exposed to the island’s mélange of cultural influences – a mix of English, French, Irish, Spanish and Portuguese - and his development as a guitarist reflects that. After graduating from the Jazz Studies program at St. FXU with honours, Duane spent several years studying contemporary music composition at the Conservatoire International de Paris and at the Conservatoire National de Region in Marseille, France.

It was during his time in France that Reinhardt’s music had a profound impact on Duane. Upon returning to his home province of Newfoundland and Labrador he began fusing traditional Newfoundland music with Reinhardt’s style and his own original compositions. This work resulted in the 2004 release of his dynamic debut solo CD, simply titled, Duane Andrews, the 2006 release of the multiple award winning “Crocus”, the 2008 release “Raindrops” which features a collaboration with the Atlantic String Quartet and two albums with Cape Breton master fiddler Dwayne Côté, 'Dwayne Côté and Duane Andrews' (2010) and 'The Empress' (2012). For more info on Dwayne and Duane check out www.dwayneandduane.com.

His most recent collaboration is with bluegrass guitarist/singer/songwriter extraordinaire Craig Young with whom he has released 'Charlie's Boogie' (2013) which can be found at www.charliesboogie.com.

”the music might be best described as Folk music played by a top Jazz guitarist and the result is refreshing and stunning. Highly recommended.” —Folkworld Magazine, Germany

“...it was the group's infectious versions of well-known Reinhardt tunes that drew the biggest applause. But it was the group's bubbling stew of styles on Newfoundland classics that still echoed after the last notes faded.” The Ottawa Citizen, Ottawa 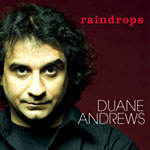 All About Jazz musician pages are maintained by musicians, publicists and trusted members like you. Interested? Tell us why you would like to improve the Duane Andrews musician page.