Duke Jordan was a pianist whose work with the saxophonist Charlie Parker endures in the jazz pantheon. Jordan was regarded as one of the great early bebop pianists, the sound that he helped to create in the postwar era was something new, and it remains a cornerstone of jazz.

Irving Sydney Jordan was born in New York in 1922, and began his formal piano studies at the age of eight.He continued to study piano until he was 16, playing in the school band at Brooklyn Automotive High. After graduation in 1939 he joined the septet of trombonist Steve Pulliam. This combo, appearing in an amateur contest at the New York World's Fair that summer, won a prize and earned the attention of John Hammond, who was impressed by the teen-aged efforts of young Duke. The unit stayed together for a year or two, after which Duke entered what, was almost certainly the most important formative phase of his career.

Jazz was undergoing a quiet but vital upheaval in 1941. Around the time when Duke Jordan went to work at a club in Harlem, the experiments that were to crystallize in the form of bebop had gotten underway at several uptown clubs. The group was under the nominal leadership of Clark Monroe, the veteran night club host who was involved in the operation of a series of clubs, including his own Uptown House where Charlie Parker first worked in New York.

Thus, though Duke gained his first experience in jazz through the records of Teddy Wilson, Art Tatum and their contemporaries, he was exposed early to the work of Bud Powell and Thelonious Monk, as well as to Gillespie and Parker. Duke was one of the very first to play in what was then a revolutionary new style; in fact the only other bop pianists of any note on the 52nd Street horizon, aside from Powell himself, were Al Haig, Billy Taylor and George Wallington.

For a while Duke played with Coleman Hawkins at Kelly's Stable, in a combo similar to the one that had been organized by Clark Monroe. After this he returned to the uptown front, working for a year with a “jump band” called the Savoy Sultans, which functioned as a part-time house band at the late lamented Savoy Ballroom.

Charlie Parker was sufficiently impressed by Duke to hire him for his quintet. Duke worked intermittently for Bird during this period (1946-48), the other members of the group being Miles Davis, Max Roach and Tommy Potter. A handful of recordings from 1947 and 1948 featuring Parker, along with Miles Davis on trumpet, Jordan on piano and Max Roach on drums, are considered masterpieces. They include “Embraceable You,” “Crazeology,” and “Scrapple From the Apple.”

During the Bird years Duke played for a few months with Roy Eldridge, recording on a big band date with Roy. Later, after leaving Bird, he worked with the Stan Getz combo in 1949. During the 1950s he free-lanced around New York, gigging with Oscar Pettiford, with off-night groups at Birdland, and also spending some time with Gene Ammons' band. His work in the 1950’s sometimes embraced more of a blues and gospel feeling but never left the fundamentals of the bebop sound.It was about 1954 that Duke began to develop as a composer. His first and best known original, “Jordu,” was recorded first by the Max Roach-Clifford Brown quintet; soon after, Duke cut it as a sideman with a Julius Watkins group for a ten-inch LP on Blue Note. In 1958 he was in Europe for a time with Kenny Dorham, Don Byas and Kenny Clarke.

Jordan's career drifted for a while in the late 60s, during which period he worked as a New York cab driver. In the 1970’s, he began a new life as a leader of trios and quartets in Copenhagen, where he settled permanently in 1978. He recorded more than 30 albums for the Danish label SteepleChase Records, but his 1960 date for Blue Note “Flight to Jordan,” remains his most recognized album endeavor.

Duke Jordan remained in Denmark until his passing in August of 2006.

Parts of this bio by Leonard Feather. Show less 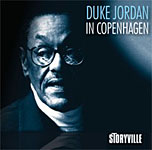 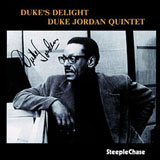 All About Jazz musician pages are maintained by musicians, publicists and trusted members like you. Interested? Tell us why you would like to improve the Duke Jordan musician page.