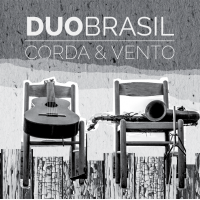 Choro, samba and bossa nova are the three main styles of Brazilian music which share, besides other things, the peculiar characteristic of harmoniously combining sadness and joy, generating a very pleasant atmosphere. As Vinícius de Moraes put it in one of his most famous songs, “happiness is the best thing that exists, (…) but in order to make a beautiful samba we need a touch of sadness”, or “samba is the sadness that swings”. This graceful combination of opposites is present in choro (which literally means “cry”) and samba, which originated in the end of the 19th century, and also in bossa nova, which came later in the 1950s and took these popular rhythms to a more sophisticated level by adding techniques of classical music and influences of jazz. Duo Brasil: Corda & Vento, strings and wind, a touch of gentle sadness with soothing joy. A sweet mixture, which is the very essence of Brazilian music.

All About Jazz musician pages are maintained by musicians, publicists and trusted members like you. Interested? Tell us why you would like to improve the Duo Brasil: Corda & Vento musician page.