Bassist Earl May, began his career in 1949 in New York City, and honed his craft in places like Minton's Playhouse with musicians such as Lester Young and Mercer Ellington. He was also a protegé of the legendary bass player Charles Mingus. Come hear the tales of Earl May's life story and career in music on August 23rd at the offices of the National Jazz Museum in Harlem.

In 1951 Earl joined the Billy Taylor Trio, appearing regularly in such clubs as the Hickory House, Birdland and the Downbeat Club. During this period Earl also worked with Charlie Parker, Miles Davis, and recorded the classic “Lush Life” with John Coltrane.

Earl left the Billy Taylor Trio in 1959 to form his own group and act as musical director and arranger for Gloria Lynne. During the mid-sixties Earl took up the electric bass and led a quartet at The New York Playboy Club.

The Earl May Quartet rapidly became the epitome of great music in the New York club scene. Over the years Earl has performed or recorded with Dizzy Gillespie, Frank Foster, Cab Calloway, Tommy Flanagan, Linda Hopkins, Doc Cheatham, Charles Brown, John Hendricks, Marlena Shaw, Ruth Brown, Winard Harper, Phyllis Hyman and the Gospel singer/pianist LD Frazier to name a few. He latterly featured with the Barry Harris Trio. Earl has many fans in the New York swing scene, having played at swing dances multiple times in Junior Mance's Trio, Benny Powell's The Gift of Love Quintet, and with his own quintet.

Celebration of Life for Earl May

Pete Malinverni and Earl May at the Knickerbocker 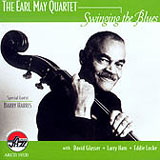 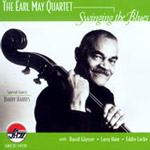 Help improve the Earl May page

All About Jazz musician pages are maintained by musicians, publicists and trusted members like you. Interested? Tell us why you would like to improve the Earl May musician page.