Starting out as a guitarist but ultimately making his name as a pianist, Eddie Boyd is universally known in blues circles for his powerful “Five Long Years.” But this oft covered Chess blues classic was by no means the only highlight of an excellent career.

Born on Frank Moore's Stovall plantation near Clarksdale in the heart of the fertile Mississippi delta (his cousin, Muddy Waters, was born there just a few months later), Boyd taught himself to play the guitar at a young age. After a hard day's work in the fields, he would take to the legendary Mississippi juke joints in the evening, playing and singing the blues to rowdy audiences of black workers. But it was a tough upbringing, and Boyd, frustrated by the unfair segregationist policies, ran into trouble after a fight with a white youth (some accounts suggest that Boyd threw a hayfork!). As a result of that incident, he joined the hordes of Southern blacks who moved further north to seek their fortune, and settled in Memphis around 1931.

The move to an even more stimulating musical environment soon rubbed off, and he learned to play the piano, developing a style that owed much to Roosevelt Sykes and Leroy Carr. He continued to play regularly in the city's bars and juke joints, often appearing on Beale Street as a pianist and singer with his band the Dixie Rhythm Boys.

But Boyd's real yearning was to commit his music to record, and in 1940 he ventured further northwards up the Mississippi to the historic capital of the blues, Chicago. By now an accomplished pianist, he felt very much in his element in the Windy City and soon became a prominent figure on the local blues scene, collaborating with luminaries such as Johnny Shines and Muddy Waters. He also found regular work on studio sessions for the RCA Victor and Bluebird labels with John Lee “Sonny Boy” Williamson, Big Bill Broonzy, Memphis Slim, Jazz Gillum and Tampa Red. Together with producer Lester Melrose, these musicians gave rise to what became known as the “Bluebird beat”, a powerful group-based style where drums, bass and piano provided dynamic support for the leader's guitar and voice.

Boyd played on some of the classic recordings of harp legend Sonny Boy Williamson I, such as “Elevator Woman” (1947). In the same year, he played piano on a session with Big Maceo, after the latter had suffered a paralysis to his right-hand side. Melrose also gave Boyd the opportunity to record his own material, billing him as “Little Eddie Boyd”. He debuted as a solo artist for RCA Victor in 1947 and remained with the label until 1949, recording a total of 21 swinging R&B sides in five sessions for the company.

At about this time, Eddie Boyd wrote the song that was to become his signature tune. Convinced that “Five Long Years” was something special, he personally financed a recording session with J. T. Brown's Boogie Band, and then sold the disk to J.O.B. Records. It was released in 1952 and gave Boyd his greatest success, topping the R&B charts. Today the song is rightly considered a blues standard, boasting cover versions by Muddy Waters, Buddy Guy, Eric Clapton, B.B. King, John Lee Hooker, Ike & Tine Turner, Junior Parker, Junior Wells, Lazy Lester, Bobby “Blue” Bland, Long John Baldry and Frank Frost. to name but a few!

Eddie Boyd had made a name for himself, and the big entrepreneurs in Chicago sat up. Top DJ Al Benson briefly signed him to his own Parrot label, before selling the contract to Chess in 1953. In his first year with the historic blues label, Boyd cut two more R&B monsters: “24 Hours” and “Third Degree”. Nevertheless, his spell at Chess really should have yielded greater success. Unfortunately, he failed to hit it off with Leonard Chess from the outset, and as time went on things further deteriorated.

Boyd's career then received a severe blow in 1957 when he was involved in a very serious car crash in Illinois. This left him in a hospital bed for some three months, and when he finally recovered he realized that his relationship with the Chess management had reached the point of no return. Boyd promptly moved on to Narvel “Cadillac Baby” Eatmon's Bea & Baby label, and recorded a series of eight sides in 1959 (with Robert Lockwood Jr. on guitar). But Bea & Baby was very much a low profile outfit, light years from Chess. Boyd switched from label to label but his popularity had waned considerably, and obscurity beckoned.

Almost by chance, he found himself on the 1965 American Folk Blues Festival touring roster, and decided that perhaps his future lay in Europe. An appearance at the Hague Blues Festival (the first big blues concert ever to be organized in Holland) followed in the same year, and Boyd realized that not only was Europe relatively free of the racial discrimination that had plagued him in the U.S. it also promised to be the starting place for the blues revival, with ample recording opportunities for past greats like himself. Switching residence from Paris to Belgium, he also found time to visit London and record an LP for ace blue producer Mike Vernon in 1967. Backing him on this Blue Horizon release was the original members of Fleetwood Mac, with a tasteful Peter Green on lead guitar. A second LP featured John Mayall on harmonica, together with Green, and a rhythm section of John McVie and Aynsley Dunbar.

In 1970, he married a Finnish girl and settled in Helsinki, continuing to gig regularly in Finland over the next two decades. A serious heart condition caused by a defective valve forced him to undergo heart surgery in 1980, but he recovered sufficiently to delight an enthusiastic crowd at the Chicago Blues Festival in 1986, and went on to record a cassette of gospel music in 1993. Boyd passed away the following year at Melilahti Hospital in Helsinki at the age of 80. 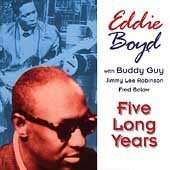 All About Jazz musician pages are maintained by musicians, publicists and trusted members like you. Interested? Tell us why you would like to improve the Eddie Boyd musician page.